Work on Bangabandhu Tunnel going on in full swing 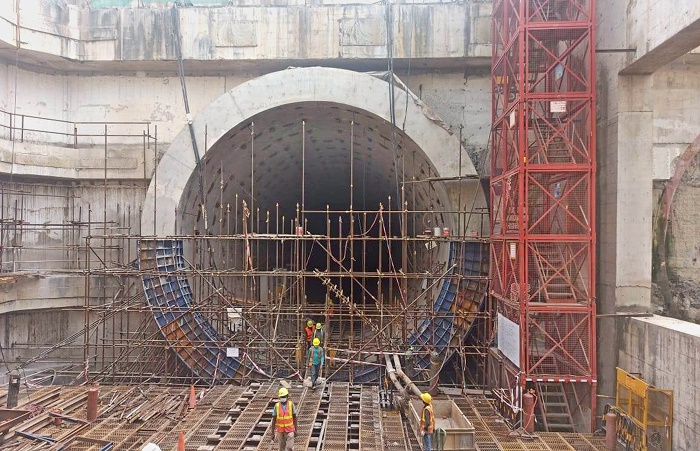 Engineers and technicians are seen busy in construction work of Bangabandhu Tunnel beneath the bed of the Karnaphuli River in Chattogram city. The photo was taken on Wednesday.

Chattogram: Construction of the first-ever ‘Bangabandhu Sheikh Mujibur Rahman Tunnel’ beneath the Karnaphuli River is going on in full swing. Around 64 percent work of the project has already been done.

The project officials hoped that boring works of second tube of the tunnel will be completed by December this year and the tunnel can be opened to traffic by December 2022, deadline of the project.

Project Director (PD) Harunur Rashid Chowdhury told the daily sun that after successful boring work of the first tube, works of the second tube are going on in full swing.

Some 730-metre stretch of the second tube has already been bored till date, he said.

“We are hopeful to open the tunnel for traffic by December, the deadline of the project work, if the pace of works is not uninterrupted,” he added.

Sources said apart from the works related to the tubes, the workers are now busy with developing approach road, overpass, bridge and culvert at the Patenga and Anwara ends of the project site.

Some 80 percent of the concrete segments being brought from the China for using in the tube have also reached Chattogram.

It is mentionable that the Bridge Authority of Road Transport and Bridges Ministry took the initiative for constructing the tunnel with an aim to connect the southern part of the port city with Anwara upazila on other bank of the river following the model of ‘One City and Two Town.’

The project objectives also include improvement of road communication in the country’s southeastern region, getting connected with the Asian highway network, planned urbanisation on the both banks of the river and enhancing facilities for the Chattogram Port.

China Communications Construction Company Limited is implementing the project to construct the dream 9.39 kilometre tunnel with two tubes for traffic.

Of the total length, the main tunnel will be 3.4 km long, the approach roads in the east and west ends 5.35 km and an over bridge (viaduct) 727 metres.

The tunnel will connect the Naval avenue point of the port city and CUFL point under the Anwara upazila in the district.

The 17-km long and 90-foot wide four-lane outer ring road on the existing coastal embankment stretching from Patenga to Faujdarhat area under Sitakunda upazila will connect the tunnel at Patenga.

The Tk10,374 crore project is being implemented with the fund from Government of Bangladesh (GoB) and China.

The officials concerned informed that some 1,000 people including 300 Chinese engineers and workers are working relentlessly for the project on the both sides of the river.

Asked about the work’s pace during the corona pandemic, the project officials said the pandemic didn’t disrupt the works as the authority ensured accommodation facilities for all the engineers and workers inside the project site.

So, none of the people needed to go outside during the period, they said.

Mentionable, the Prime Minister Sheikh Hasina and Chinese President Xi Jinping laid foundation stones of the tunnel at a programme in the capital on October 14 in 2017.

The prime minister also inaugurated the boring works on February 24 in 2019.