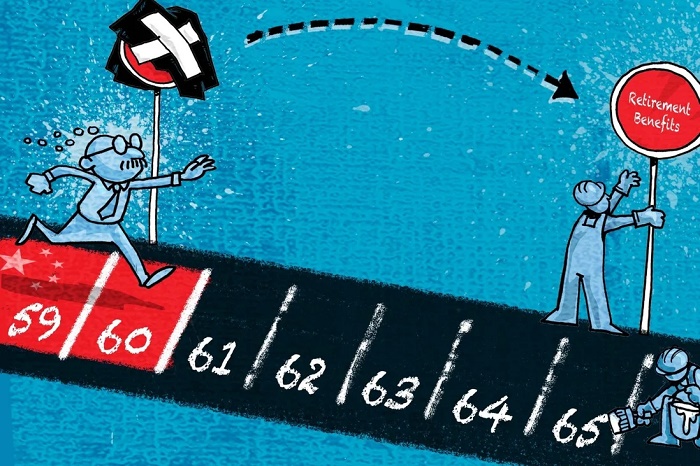 Speculation is running rampant among Chinese about how many years of pension income may be lost after the government announced plans to gradually increase the nation’s mandatory retirement age.

The move has sparked deep concern among working and middle class citizens, many of whom may now have to work for years more than planned and are scrambling to get their finances in order.

On Chinese microblogging site Weibo, a popular post on the new policy has been read more than 210 million times and garnered more than 19,000 comments in the past two weeks.

Critics have raised concerns about the effect of the change on consumption, fertility rates and investments.

No one knows what an ageing China will look like in 20 years, we all have a lot of fear and uncertainty about it.

“No one knows what an ageing China will look like in 20 years, we all have a lot of fear and uncertainty about it,” said Gong Wentao, a Shenzhen-based IT specialist in his late 40s. “My colleagues and I have been chatting a lot about how to prepare for it.”

Gong said some of his co-workers planned to sell properties in lower-tier cities in anticipation of higher vacancy rates, while others were considering mortgaging their homes to invest in high-return financial products. But he was opting for a more modest strategy: cutting daily spending.

“Either way, this reflects our anxiety about the delayed retirement age,” he said.

But like its East Asian neighbours, China’s population is rapidly ageing and its fertility rates are plummeting – setting the scene for a demographic time bomb that could put the brakes on the nation’s economic growth.

However, the move has struck a nerve with average Chinese, especially those born after 1970.

James Qiu, a Guangzhou-based sales manager in his 30s, said raising the retirement age by comparing China with developed countries – where people typically worked longer – was “unscientific and unfair”.

“We will face serious problems in our 50s and 60s; likely a significant drop in income or unemployment, because in today’s job market, very few private companies will hire an employee that old.”

That will increase the burden of medical expenses and mortgage payments, he said.