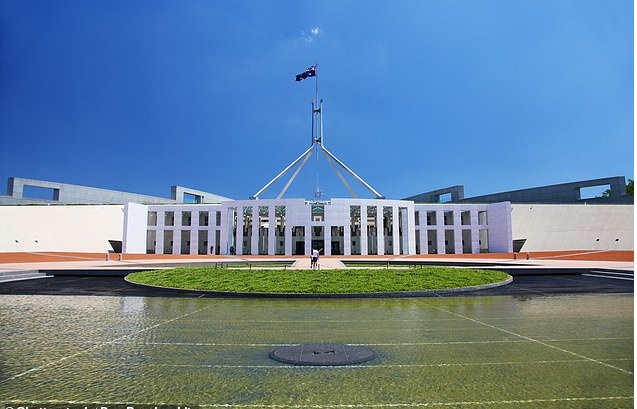 Senior politicians fear Parliament House may have been hacked as a widespread IT outage sparks cyber-attack concerns.

The Federal Government suspended access to emails at Parliament House to combat a suspected cyber attack that started at midday on Saturday, news.com.au reports.

Government sources claimed Australia's parliamentary IT system is under attack from a 'foreign actor,' prompting fears China is involved following soured relations between the two nations.

'DPS is also working to investigate the cause of the disruption and the Australian Cyber Security Centre is providing advice as part of process,' a DPS spokesperson said.

The Department of Parliamentary Services sent an email to staff on Sunday informing them the incident is urgently being investigated.

'An ICT outage is currently affecting various ICT services including email, calendar and contacts on smartphones and tablets,' the email said.

Staff were told email, calendar events and contacts that are already stored on their devices 'should remain accessible' while support teams investigate.

Home Affairs spokesman Kristina Keneally said she wouldn't speculate on the matter, but revealed Labor will be briefed from the Government.

It was also revealed that a potential messaging scam was afoot, affecting senior ministers including Finance Minister Simon Birmingham.

'The AFP is aware of a messaging scam currently targeting Commonwealth Parliamentarians and Australian High Office Holders, which presents as a request from a trusted colleague,' a statement read.

The scam originated over WhatsApp and asked message recipients to download the Telegram application for 'the purposes of further communication'.

The AFP said the request is 'not genuine' and could be used to gain information from people's phones.

Recipients are advised to not respond to the message or send any two-factor authentication codes to the sender.

They are also urged to send a screen shot of the message to the AFP and retain the original message for subsequent AFP technical analysis and evidence.

It comes after Nine Network revealed it had been the target of a cyber-attack, disrupting its live programming out of Sydney.

The Australian broadcaster confirmed there was a cyber-attack on its systems after it was unable to air its Weekend Today and Sunday Sport programs on Sunday morning.

In a note to staff, Nine's director of people and culture Vanessa Morley told all employees across the country to work from home until further notice.

'Our IT teams are working around the clock to fully restore our systems which have primarily affected our broadcast and corporate business units,' she wrote.

'Publishing and radio systems continue to be operational.'