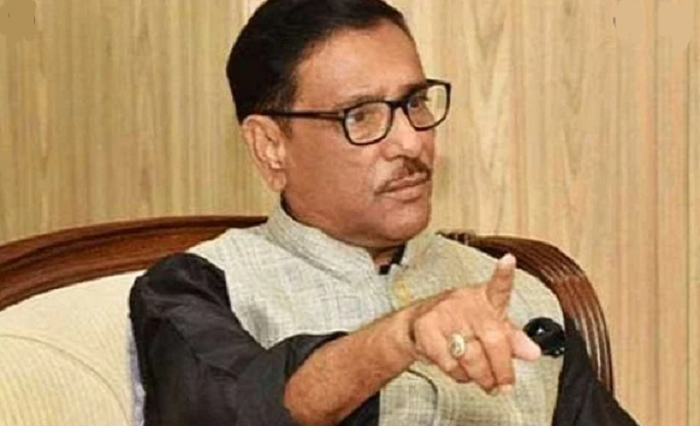 Awami League General Secretary Obaidul Quader said on Wednesday BNP’s call to the government to resign is an undemocratic attitude.

“This call of BNP is ridiculous. People brought the government in power for a particular period. So, after completing its term, general election will be held as per the constitution,” he told a press conference on contemporary issues at his official residence.

Quader, also the road transport and bridges minister, said BNP leaders are now demanding the resign of the government aiming to hide its isolation from the people.

The BNP leaders from top to bottom should resign from their party as they have failed in elections and movements, he said.

Responding to an allegation of BNP secretary general Mirza Fakhrul Islam Alamgir, the AL general secretary said judiciary is working independently as the government has no interference on it.

If the Election Commission (EC) gives the guarantee of BNP’s win, then the party would say that the EC is neutral, he said, adding BNP leaders are continuously conducting propaganda against all entities of the state and making falsehood about judiciary in a planned way.

Quader said BNP has been doing politics of intrigues and terrorism since its birth and enjoying power is its main goal, not the public interest,.

The BNP leaders are blind now to assume power, he added.

Quader was critical of BNP for not cooperating with the government as the opposition party.

About the destructive acts carried out in different areas, including Hathazari of Chattogram and Brahmanbaria, in the last few days, the AL general secretary termed those as regretful.

He said BNP as a political party is instigating these terrorist acts and sheltering those involved in the acts.

Urging BNP to stand by the people amid the ongoing COVID-19 crisis, Quader said: “Follow health guidelines and encourage people to follow those. And this is the duty of you all.”