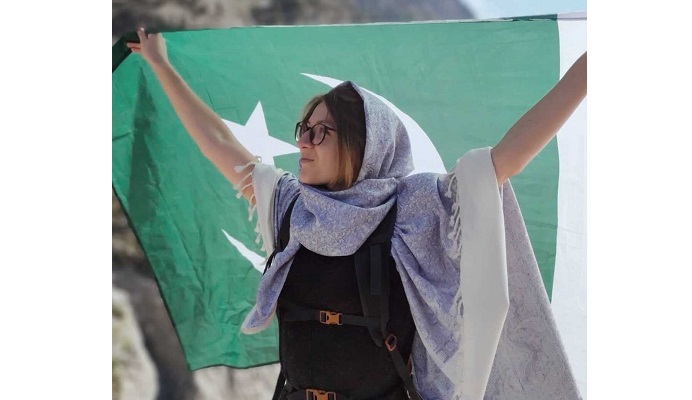 If you are somewhat active on Pakistani Twitter, you might have seen a series of tweets garnering a lot of attention over the last two days. An account by the name of Katherine George, claiming to be a traveler in the Twitter bio, could be seen falling in love with Pakistan and its scenic locales.

The said Twitter account was made in February 2021 with a following of over 11.2k. Although Katherine’s Twitter timeline is filled with posts praising Pakistan and its culture, one tweet that in particular had the Pakistani Twitter both in fits and agony at the same time. 'Katherine' shared a picture with few men in the backdrop and said "no one in the world respect women as much as Pakistani men. Very respectful and humble."

Her stance caused a ruckus on social media as many shared their own experiences to be the opposite. Many called out the traveller on how a white woman gets to share her ‘privileged’ experience in the same country where several women are murdered, killed over honour, harassed, or raped as well.

However, a day after the tweet made headlines, it was revealed that Katherine George is indeed a fake account, using pictures of a Polish traveller Aleks Mroz without her consent.

Things took a turn for the better when someone contacted Aleks on Instagram and asked for her opinion over the tweets under discussion. To which, she shared that someone is impersonating her on Twitter and using her pictures without her consent. It is true, however, that she did visit Pakistan, but never made a Twitter account.

She later took to Instagram and clarified the matter. "I cannot speak for Pakistani girls and women here who know their country best." Aleks further shared, "Women fought gender-based crimes and violence and I as a foreign woman has no right to state such clear statements about what Pakistani women know best." She concluded by saying, "I will never speak for Pakistani women."

And just when you think we were done with the gaffe, the 'Katherine' account started calling out people who were reporting her fake Twitter account. "I only tweet positive news about Pakistan and also share positive news by various bloggers who visit Pakistan. What is my crime that all people are using stupid innuendos and going gaga over these positive tweets that are not targeting anyone?"

Katherine then shared a snippet from Aleks' Insta story where the latter shared her honest stance over women's safety in Pakistan. In response to this, Aleks called Katherine out once again. "This post is cut out from my private account on Instagram (goldenbrownbaozi) without context," she shared. "To be clear: I said this post was FAKE and my photos were used without my consent and I asked for REPORTING the account of Katherine George."