Secular colours of Nowruz in Kashmir 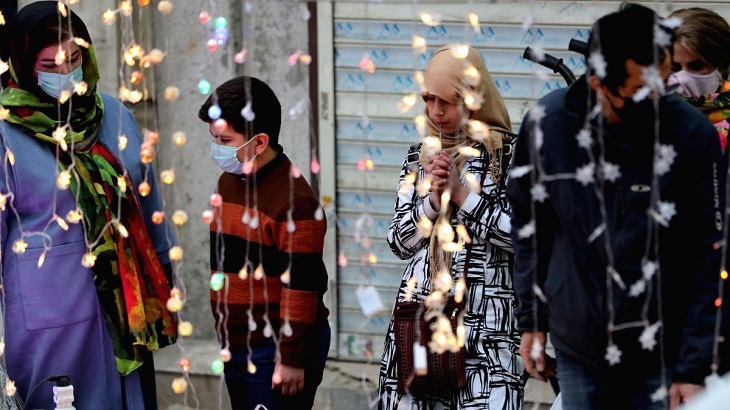 Most people think of Kashmiri culture in terms of binary of Kashmiri Hindu Pundit and Kashmiri Muslim culture, but the reality is that Kashmirs culture and the origin of Kashmiri people remains buried in mystery.

While Kashmir remains among few places in South Asia with a recorded history as exhibited brilliantly in the Sanskrit language epic work of "Rajtarangini", written by Kashmiri Pandit writer, Kalhana, there are many aspects of Kashmiri culture that make Kashmir a far more complex, mysterious and interesting places and the celebration of the spring festival of Persian new year Nowruz is one of them.

Most people associate Nowruz with Iran or Shia Muslim community but in Kashmir, Nowruz is truly a secular festival and it is marked by Kashmir's all religious communities in one form or the other.

The festival of Nowruz traditionally falls around March 21 on the day of vernal equinox that marks the beginning of spring in Northern hemisphere. In Kashmir valley, the famous almond blossom festival at Badam Wari on the foothills of Hari Parbat in Srinagar city has become the symbol of the onset of spring as well as Jashn-e-Bahar - Nowruz festival in recent times.

Contrary to what many people believe, Nowruz is not a Muslim festival but has roots in ancient Zoroastrian and Rig Vedic culture of ancient Persians and Vedic Aryans. The Parsi community of Gujarat and Maharashtra continues to celebrate Nowruz till this day as part of thousands of years old Parsi Zoroastrian cultural heritage.

Within Kashmir valley, the Kashmiri Hindu Pandit community marks the Nowruz as "Navreh", both of which literally mean the same thing - "New Day". The Kashmiri Hindu Pandits celebrate Navreh in exactly the same manner as Parsi Zoroastrians and Iranian Shias by symbolic display of seven or more items displayed as a symbol of fortune and thanks giving called "Haft Seen" in Iran and "Thal Bharun" in Kashmir. The difference between Iranian "Haft Seen" and Kashmiri Pandit "Thal Bharun" is that while in Iran, items are displayed on a table, among Kashmiri Hindu Pandits, the items are displayed in a platter called 'Thal" in Koshur language.

The composition of seven or more items displayed varies according to local customs but some common items include coin, pen, grain, mirror, holy book etc., each having a significance and meaning of its own. Kashmiri Pandits attribute the celebration of "Thal Bharun" and Navreh to the Rig Vedic origin of Kashmiri Hindu Shaivite community.

Interestingly, Kashmiri Pandits are the only Hindu community that celebrates this Persian Iranian festival of Nowruz, which many anthropologists and historians allude to presence of Zoroastrian or a modified form of Zoroastrian faith in Kashmir valley, often called "Avestan" or Eastern Persian culture that was spread over present day Afghanistan, Tajikistan, Pashtun parts of Northern Pakistan and Gilt Baltistan. The surviving traces of Nowruz means that ancient Kashmir was also part of this extended Eastern Persian cultural realm.

The festival of Nowruz is widely celebrated by Shia communities all over the world but it is not restricted to any one particular Islamic sect. The festival is also the most important secular cultural celebrations among Sunni Muslim communities of Central Asian nations like Tajikistan, Uzbekistan, Kyrgyzstan, Turkmenistan and Kazakhstan, where it is marked by preparation of special feasts and days of widescale music and dance by ordinary people as well as that organized on grand scale by government on national level that includes parades. Similarly, the Pashtun Sunni Muslim community of Afghanistan and Pakistan also celebrates this festival by feasting, dancing and singing.

The festival is also celebrated by Chinese Turkic Uyghur Sunni Muslim community from Xinjiang (East Turkestan) province and Kurdish Sunni Muslim community in Iraq and Turkey, where it's widescale celebrations has been revived by ethnic Kurds of younger generation to take pride in their glorious historic cultural legacy.

Even in Kashmir valley the Muslim community, especially Kashmir valley's Shia community celebrates Nowruz on a big scale by preparing special meals of fish and lotus stem (Nadru), wearing new clothes, frequenting Kashmir's famed gardens, parks and taking family tours on shikaras and most importantly planting new trees. It is a way of celebrating man's ties with nature and thanking God and mother earth for its limitless bounty.

The festival because of its secular and pre-Islamic origin has come under attack from conservative and orthodox religious elements, who have declared the festival as un-Islamic, but most countries including Iran, Central Asian Sunni countries and Afghanistan has largely ignored these dictates and Muslim communities in these countries celebrate it widely almost on the scale of celebrating two Eids as part of paying tribute to their historic cultural legacy and heritage. Given the cultural significance of this festival across Central and South Asian nations, the UN also declared the marking of 'International Nowruz Day" as a cultural legacy of entire humanity In Kashmir valley, the significance of Nowruz or Navreh lies in the age old secular spirit of Kashmiriyat, where Hindu Shaivite and Sufi Islam as well as Shia and Sunni brotherhood all came together to welcome the advent of spring after months of harsh winter in a non-religious manner in the true spirit of one Koshurness that encompasses all religions and sects of Kashmir. It is a pity that the celebrations of this wonderful festival that is an important part of Kashmiri culture has scaled down in recent times due to political turmoil. It is high time that, we the people of Kashmir once again strive to revive this amazing secular festival that marks the celebrations of the beauty of Kashmir and the communal and sectarian harmony of Kashmiri people that is the real hallmark of Kashmiriyat.