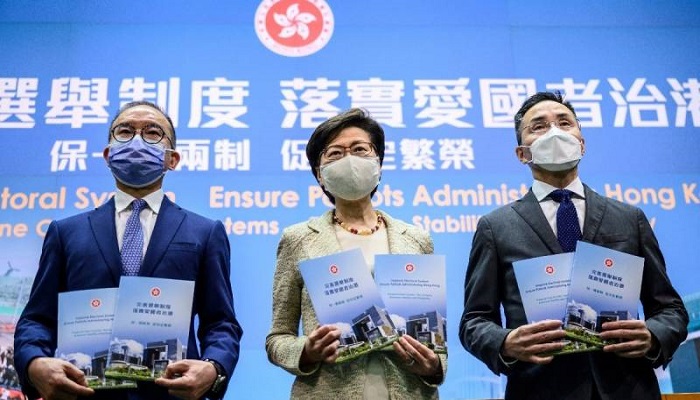 Chinese leaders endorsed a sweeping overhaul of Hong Kong’s electoral system on Tuesday, creating powers to vet anyone standing for public office and slashing the number of directly elected politicians.

The new measures, which bypassed Hong Kong’s legislature and were imposed directly by Beijing, are the latest move aimed at quashing the city’s democracy movement after huge protests.

One of the most dramatic changes is the introduction of a committee that will vet anyone hoping to enter Hong Kong politics for their patriotism.

The body will include background checks by the territory’s new national security apparatus and its decisions cannot be legally challenged.

When Hong Kongers are allowed to vote in limited local elections, they tend to do so overwhelmingly for pro-democracy candidates, something that has rattled authoritarian Beijing.

Under the new measures, the city’s legislature will be expanded from 70 to 90 seats.

But only 20 of those seats will now be directly elected, down from 35. That brings direct representation down from half to less than a quarter of seats.

The majority — 40 seats — will be chosen by a reliably pro-Beijing committee. The remaining 30 will be picked by “functional constituencies” — bodies representing certain industries and special interest groups that have also been historically loyal to Beijing.

The measures were welcomed by Hong Kong’s pro-Beijing government, which will no longer have to face a noisy and disruptive pro-democracy opposition in the legislature.

“The excessive politicisation in society and the internal rift that has torn Hong Kong apart can be effectively mitigated,” said chief executive Carrie Lam.

The next legislative elections under the new system would be held in December, she said.

“Hong Kong’s institutions of political power and governance must always be firmly in the hands of those who love the motherland and Hong Kong,” added the Hong Kong and Macau Affairs Office, which formulates Beijing’s policies for the financial hub.

Opposition figures and some analysts took a less rosy view, describing the new measures as a clear move to ensure any remaining opposition to Beijing’s rule is stamped out.

Lau questioned whether Hong Kongers would want to partake in future elections and warned political unrest could explode again.

Chong Ja Ian, an associate professor on politics from the National University of Singapore, said the new measures “seem to run against the spirit of having, free, fair and competitive elections, limiting popular participation in the political process”.

“Certainly, giving a police force the power to oversee who can stand for elections is not seen in systems usually deemed democratic in a meaningful sense,” he told AFP.

China’s leaders have acted decisively to dismantle Hong Kong’s limited democratic pillars after massive protests in 2019, imposing a national security law that has been weaponised against the financial hub’s democracy movement.

Dozens of campaigners have been prosecuted or jailed, smothering protests in a city that had enjoyed greater political freedoms than the authoritarian mainland under the “one country, two systems” agreed ahead of Britain’s 1997 handover.

The withering of Hong Kong’s democratic freedoms is one of the key fronts opening up between the West and China, which insists it is an internal affair.

The electoral “reforms” resurrected a cascade of criticism from Western powers when they were first announced earlier in March.

“one country, two systems” promise, with Foreign Secretary Dominic Raab tweeting on Tuesday the enacted changes were a “clear breach of the Joint Declaration”.

US President Joe Biden described the corralling of the city’s freedoms as part of a wider China-led assault on democracy and rights, including the treatment of Muslim minorities in the northwestern Xinjiang region.

The future of Hong Kong is of intense interest to international powers and businesses because it is home to hundreds of thousands of foreign workers and billions of dollars in investments.