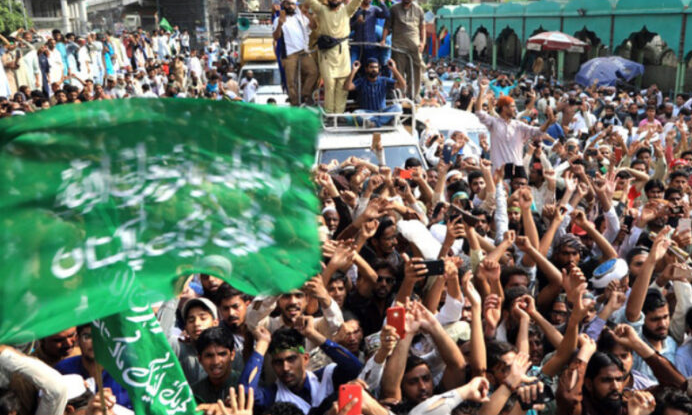 The Pakistan government has agreed another deal with another extremist organization. This time the government has once again signed an agreement with the radical Tehreek Labaik Pakistan (TLP).

The government and the TLP had been in talks since January 2021 and while talking to the media, Prime Minister Imran Khan confirmed this. “The TLP’s demands will be discussed in Parliament and it has postponed its protest till April 20,” he said
The agreement has been signed over the expulsion of French ambassador and boycott of French products. Islamabad would not appoint an envoy to the European state and release all TLP workers. Furthermore, the government has agreed to remove the TLP workers from the fourth schedule of the Anti-Terrorism Act (ATA). Under the fourth schedule, the suspect has to inform police before leaving his hometown.

“Negotiations have been going on between the Government of Pakistan and TLP on this problem for a month during which the government has reaffirmed its resolve,” reads the agreement.

“Terms of the [previous] agreement will be presented in parliament by April 20, 2021, and decisions will be taken with the approval of the parliament.”

Confirming the deal, Minister for Religious Affairs, Noor ul Haq Qadri said: “Our stance on the issue of blasphemy of Holy Prophet Muhammad (Peace Be Upon Him) is clear and unambiguous.”

Earlier, while addressing a large crowd, TLP head Saad Rizvi said: “If you have forgotten the promise, see our history. Now we’re even more ready to die (for the honour of the Prophet (SAW). You’ve got to expel the French ambassador.”

Critics question if there is anything new in the Pakistani state succumbing to radical groups. This is not the first time the government has bent in front of extremists. The federal government signed a similar agreement in 2017, then in November 2020 and now this one.

- Advertisement -
Furthermore, all the TLP workers who caused distress, blocked the roads and destroyed public properties will be set free. Analysts say that the government holding a session over potential expulsion of an envoy of another state means that it couldn’t face the pressure from a radical organization.

Critics also question what kind of message it would give to the other countries, where we are already facing an issue of image. The current government has claimed to work for enhancing the country’s image in the global community, and observers maintain that such agreements will not help at all on that front.

Those questioning the move maintain that the foreign policy of the country appears to be controlled by an organization which has almost-zero representation in Parliament and got recognition after the hanging of Mumtaz Qadri, killer of former Punjab Governor Salman Taseer for blasphemy charges. The move is being seen as evidence that TLP is becoming stronger, despite that fact that its head and founder Maulana Khadim Hussain Rizvi passed away. Now his son is leading the party, which seems to still hold an upper hand over the government.

The most important aspect of this whole scenario is  Pakistan’s inclusion in the grey list of the Financial Action Task Force (FATF). Although Islamabad has fulfilled 24 conditions out of 27 of the organization, still it has remained unable to come out of the grey list.

In the last meeting, FATF announced to review Pakistan’s status in June 2021 again, to see whether it fulfills the remaining three conditions or not. There are evident concerns over the message the FATF will receive through this agreement, which can negatively impact Islamabad’s effort to come out of the list in June.

The federal government has been urged by critics, analysts, and rights groups to tackle the radical organization with dominance, not through extensive power, but through proper policies with state power. Islamabad has been asked to show that the state doesn’t run on the mere wishes of a few, rather it has to take steps while keeping in mind the social, economic, security and diplomatic consequences of every policy.