Partnership has evolved as a model for bilateral relations for entire region, say India, Bangladesh 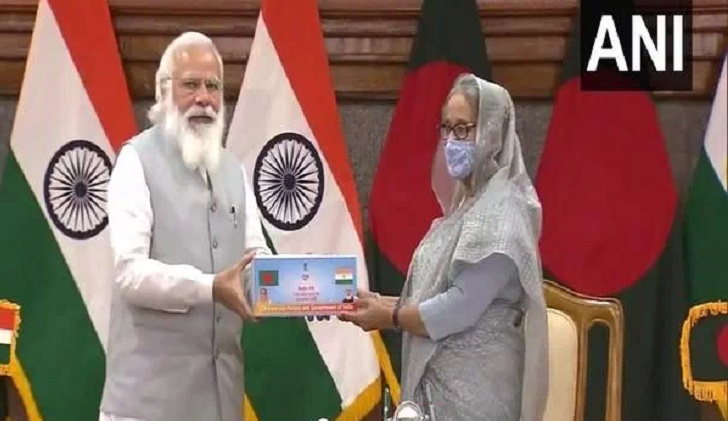 India and Bangladesh on Saturday signed MoUs in key sectors including trade and technology to foster bilateral ties with Prime Minister Narendra Modi and his Bangladesh counterpart inaugurating three border haats, a new passenger train and affirming commitment to eliminating terrorism in all its forms.

The first visit by Prime Minister Modi to a foreign country after the outbreak of COVID-19 was significant both for its symbolism and its substance.

It coincided with epochal events - celebrations of the Golden Jubilee of the Independence of Bangladesh, the birth centenary of the Father of the Nation Bangabandhu Sheikh Mujibur Rahman and 50 years of establishment of diplomatic relations between India and Bangladesh.

PM Modi and Sheikh Hasina held bilateral talks on Saturday after which MoUs were exchanged.

The joint statement issued after the talks said the visit symbolised the partnership of half-a-century between India and Bangladesh that has strengthened, matured and "evolved as a model for bilateral relations for the entire region".

The talks were marked by "great warmth and cordiality".

"The two leaders expressed satisfaction at the excellent state of bilateral relations, based on deep historical and fraternal ties, which reflect an all-encompassing bilateral partnership based on equality, trust and understanding that transcends even a strategic partnership," the statement said.

"Recognizing that terrorism remains a threat to global peace and security, both sides reiterated their strong commitment to eliminating terrorism in all its forms and manifestations," it added.

On the second and two-day visit to Bangladesh, PM Modi offered prayers at the Jeshoreshwari Kali Temple in Ishwaripur, Satkhira district on Saturday.

He said India will undertake the construction work of a multi-purpose community hall at the Jeshoreshwari Kali temple.

He also offered prayers at the Orakandi Temple located at Kashiani Upazila in the Gopalganj district of Bangladesh. The temple is associated with Matua community.

During the visit, the two Prime Ministers jointly inaugurated the Bangabandhu - Bapu Digital Exhibition in Dhaka, which celebrates the life and legacy of these iconic leaders.

The two Prime Ministers affirmed that the legacy and ideals of the two great leaders would continue to inspire the people worldwide, particularly the youth, against oppression.

The visit saw the foundation stone laying ceremony for a memorial in honour of the Martyrs of the Indian Armed Forces who sacrificed their lives during the Liberation War of 1971 at Ashuganj, Brahmanbaria.

To mark the 50th anniversary of India-Bangladesh friendship, both sides released respective commemorative postage stamps. It was decided to commemorate December 6 as Maitri Diwas, the day when India recognized Bangladesh in the year 1971.

The Indian side announced the establishment of the Bangabandhu Chair at the University of Delhi. In view of the 50th anniversary of the Independence of Bangladesh as well as the establishment of bilateral diplomatic ties, both sides have agreed to jointly commemorate these epochal events in 19 select countries.

Both sides noted with satisfaction that the filming of the biopic on Bangabandhu Sheikh Mujibur Rahman, under the direction of Indian film director Shyam Benegal, has commenced. Both sides stressed the need to commence work on the Liberation War documentary at the earliest.

Prime Minister Narendra Modi extended an invitation to Prime Minister Sheikh Hasina to visit India in 2022 in commemoration of the Golden Jubilee of the establishment of diplomatic relations.

The Bangladesh side welcomed the decision of the Government of India to announce 1000 Shuborno Jayanti Scholarships for Bangladeshi students for pursuing education/courses in India.

Prime Minister Sheikh Hasina reiterated Bangladesh's long-pending request for concluding the interim agreement on the sharing of the waters of the Teesta river. PM Modi reiterated India's sincere commitment and continued efforts to conclude this agreement, in consultation with the relevant stakeholders. The Indian side also requested for early finalization of the draft of the interim agreement for sharing of water of Feni River.

To enhance trade between the two countries, both Prime Ministers underscored the need for the removal of non-tariff barriers.

The Indian side reiterated its request for at least one major land port without port restrictions or with a negative list of restrictions, on the border with the North Eastern Region of India, [where feasible] for easier market access, starting with ICP Agartala-Akhaura.

Both sides emphasized on expeditious conclusion of the ongoing joint study on the prospects of entering into a Comprehensive Economic Partnership Agreement (CEPA).

Underscoring the important role that the jute sector has played in Bangladesh's economy, the Bangladesh side invited Indian investment in the jute mills of Bangladesh under a public-private partnership.

To facilitate better connectivity and simplify the movement of passengers and goods between both countries, both leaders agreed to an early operationalization of the BBIN Motor Vehicles Agreement through the expeditious signing of the enabling MoU for Bangladesh, India, and Nepal to commence the movement of goods and passengers, with provision for Bhutan to join at a later date.

Sheikh Hasina offered the use of Chattogram and Sylhet International Airport, by the people of North East India, especially of Tripura. Bangladesh also informed that Saidpur Airport is being developed as a regional airport for the use of the people of this region.

Bangladesh side thanked the Government of India for gifting 3.2 million doses of Oxford Astra Zeneca Covishield vaccine made in India and appreciated the prompt delivery of the first batch of 5 million doses.

Indian side requested for completion of border fencing at all pending sectors at the international border at the earliest, beginning from the Tripura (India) - Bangladesh sector.

The statement said Prime Minister Narendra Modi expressed appreciation at the generosity of Bangladesh in sheltering and providing humanitarian assistance to the 1.1 million forcibly displaced persons from the Rakhine State of Myanmar.

The visit saw inauguration of Rabindra Bhawan faciliites in Kuthibari