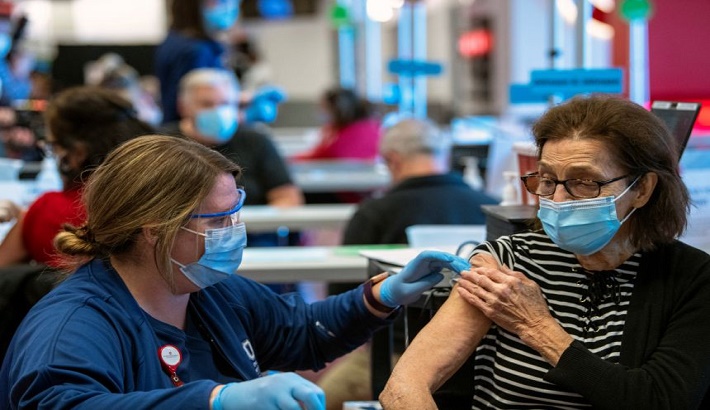 US President Joe Biden's administration on Monday (March 29) announced a raft of new actions to expand the national immunisation campaign and ensure that 90 per cent of adults will be eligible for vaccination against the coronavirus by April 19.

But he warned the "the war against Covid-19 is far from won," and blasted people responsible for "reckless behaviour we've seen on television over the past few weeks" that had left the world's worst-hit country on the brink of a fresh surge.

The new vaccination measures include increasing the number of pharmacies participating in a federal immunisation programme from 17,000 to nearly 40,000, while creating a dozen more mass vaccination sites within three weeks.

It also includes US$100 million (S$135 million) in funding to help vaccinate vulnerable and at-risk older adults and people with disabilities.

The overall goal is to ensure 90 per cent of adults will have a vaccination site within five miles (8km) of where they live.

The moves came after Rochelle Walensky, director of the Centres for Disease Control and Prevention (CDC), highlighted worrying trends in the data that signalled the United States could soon follow Europe into another wave.

The rate of infection in the United States had been plateauing for several weeks, but is now once more on the rise, with the most recent data showing the seven-day average at close to 60,000 new daily cases.

That represents an increase of 10 per cent over the prior seven-day period, while hospitalisations are up to 4,800 per day from 4,600 comparing the same timeframes.

Deaths have risen three per cent to around 1,000 per day.

Six states have so far lifted mask mandates and several more plan to do so in the first half of April.

American health workers have now administered 143 million shots, and 16 per cent of the population is fully vaccinated, including half of over-65s.

But the US is also by far the most affected country, with close to 550,000 deaths and more than 30 million confirmed cases.