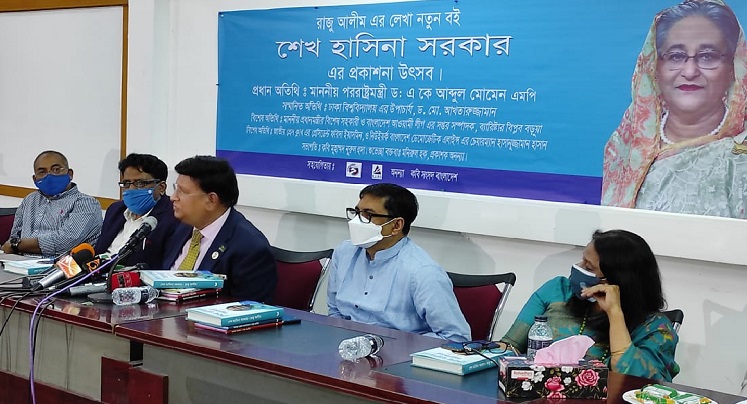 Foreign Minister Dr AK Abdul Momen on Monday said extreme poverty rate will come down to 3 percent by 2030 and that the country will be free of poverty after 2041.

"Once 80 percent people were poor in Bangladesh but now the poverty rate stands at 20 percent thanks to good initiatives. The Sheikh Hasina government laid emphasis on eliminating poverty from the country in 2009," he said at the unwrapping ceremony of the book titled "Sheikh Hasina Sarker" at Jatiya Press Club in the capital.

"Once our annual average growth rate was 2.2 percent. Now it’s 6.9 percent. It's an unbelievable development. Bangabandhu brought freedom and his daughter fulfilled his dreams," he said.

Momen said Bangladesh once faced serious food crisis. The government announced to resolve the problem providing subsidy in agriculture sector. Now there is no food crisis.

"Earlier, power cuts were common [but now] the government has increased power production to 24,000MW from 2009-2020," the minister added.

He said that is why the Prime Minister won champion of the earth award and earned the respect of the global audience.

About Indian Prime Minister Narendra Modi’s visit to Dhaka, Momen said we are honoured that he chose Bangladesh to be his first tour abroad since the coronavirus outbreak.

He added that 65 countries sent messages to appreciate Bangladesh. They also appreciated Sheikh Hasina for the Rohingya response.

Momen highlighted Bangladesh’s development and said the country currently has a forex reserve of $44 billion and is regarded as a leader in South Asia.

The author of the book Razu Alim said he tried to include various information about the government of Sheikh Hasina in his book. Jatiya Press Club President Farida Yesmin and Awami League Office Secretary Biplob Barua were also present at the event.