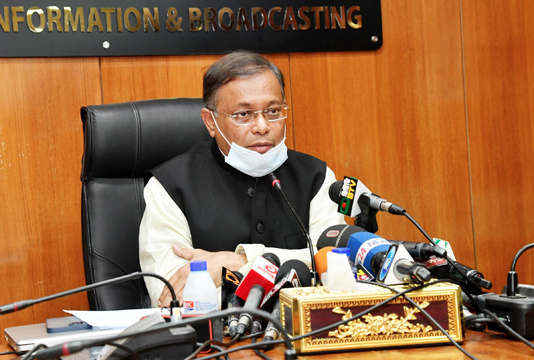 Information and Broadcasting Minister Dr Hasan Mahmud said it has been proved by the statement of BNP secretary general Mirza Fakhrul Islam Alamgir that creating anarchy is a part of their mega plan to destabilize the country.

“Nine buses and trucks were torched at Narayanganj after the end of hartal on Sunday. Roads were also blocked. And, BNP and some so called intellectuals have supported the violence and anarchy. Even, they gave statements in favour of the violent incidents,” he said.

The minister said while talking to newsmen at the meeting room of his ministry at Secretariat in the capital. Later, he exchanged views with the leaders of Dhaka Union of Journalists (DUJ).

The group carried out attacks on the public properties on the day of golden jubilee of the country’s independence, Hasan said, adding “And BNP-Jamaat has supported the group.”

Besides, Mirza Fakhrul Islam’s speech on overthrowing the government through movement, proved that all these sabotages were carried out under their advice and patronization, said Hasan, also Awami League joint general secretary.

The minister said BNP-Jamaat had created anarchy in 2013, 2014 and 2015 across the country. Even, they patronized the vested quarters who created anarchy on May 5 and 6 in 2013 under the banner of Hefazat Islam, he added.

“In fact, the untoward situation was not created over the visit of Indian Prime Minister Narendra Modi, it was a part of anti-government and anti-state activities with a view to putting the government into trouble,” said Hasan.

He said the government has established peace and stability across the country combating violence in 2013, 2014 and 2015.

“The government is determined to tackle any untoward incidents to protect the life of common people and their properties,” he added.

The minister said today’s Awami League under the leadership of Prime Minister Sheikh Hasina is more stronger and confident than ever before. So, the dream of Mirza Fakhrul Islam would never come true, he added.

Replying to a query over the attacks on journalists, Hasan said it is really condemnable and unacceptable. “I would like to urge all including all political parties not to assault any journalists while they performing their duties,” he added.