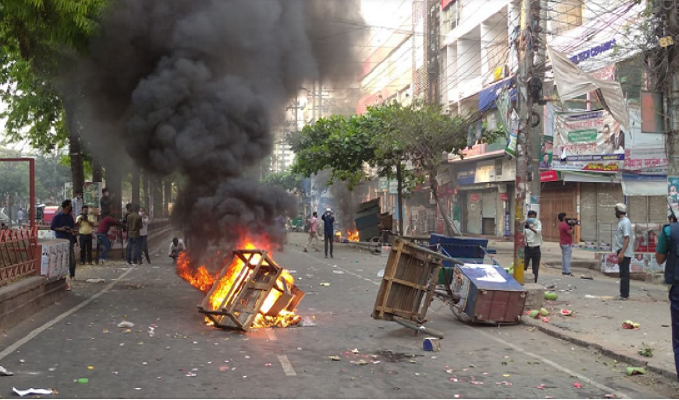 At least 20 people, including policemen, were injured in a clash between BNP activists and law enforcers at Kazir Deuri area of Chattogram city on Monday.

The clash broke out around 4pm and lasted for an hour.

Mohila Dal President Monowara Begum, BNP leader Akhi Sultana and 13 others were detained from the spot.

BNP Office Secretary Idris Ali said BNP activists were preparing for a peaceful rally and accused police of obstructing them and firing at them as they tried to reach BNP office.

Fifteen BNP activists were injured in the firing and 50 others were wounded during police action, he claimed.

Officer-in-Charge of Kotwali Police Station Md Nizam Uddin said BNP men attacked police with brick chips when the law enforcers asked them to hold a rally in a safe place instead of the road.

The agitators torched vehicles and attacked police, injuring three of them, he said.

BNP was holding the rally seeking punishing policemen involved in shooting incidents in Chattogram and Brahmanbaria during anti-Modi protests that left at least nine people dead, including several Hefazat-e-Islam activists.

Meanwhile, Hefazat enforced a day-long strike on Sunday that ended with reports of sporadic clashes across the country.

On Friday, four people were killed and at least 15 others were injured in a clash between Hefazat supporters and police at Hathazari in Chattogram.

Police opened fire after a group of protestors attacked the Hathazari thana compound, Hathazari land office and set fire to a vehicle.

On the same day, at least 50 people, including several journalists, were injured in a clash between Muslim devotees and police in Baitul Mukarram National Mosque area.

Clashes erupted when police barred people from bringing out a procession after Jum’a prayers protesting against the visit of Indian Prime Minister Narendra Modi to Bangladesh.