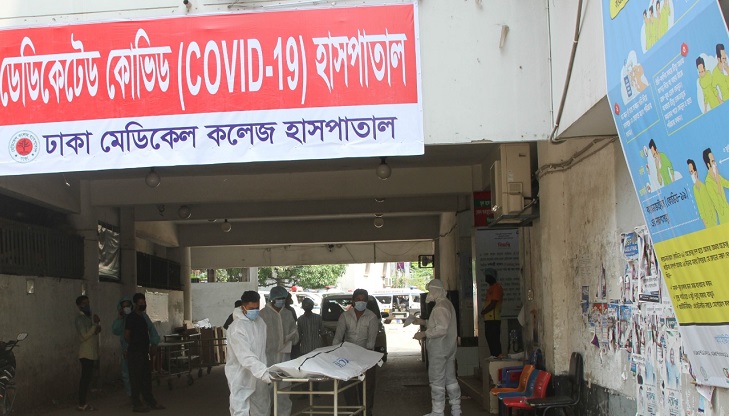 Bangladesh on Monday recorded the highest ever new cases in the last 24 hours, as 5,181 new infections were confirmed, taking the tally to 602,895.

Besides, the country reported 45 more deaths, the highest daily figure since August 28 last year from the novel coronavirus.

On August 28, the health department reported 47 deaths from the dreaded virus.

With 45 fatalities over the period, the country's death toll from the virus now stands at 8,949, according to a press release issued by the Directorate General of Health Services (DGHS).

The latest cases were reported after testing 28,195 samples.

The infection rate jumped to 18.38 percent on Monday from 17.65 percent on Sunday.

However, the death rate stands at 1.49 percent.

During this 24-hour period, 2,077 coronavirus patients recovered. So far, 538,018 patients have made recoveries.

Twenty-eight people died in Dhaka Division, six in Chattogram, five in Rajshahi, three in Khulna and one each in Barishal, Mymensingh and Rangpur.

Bangladesh reported its first cases on March 8, 2020 and the first death on March 18 the same year.

Amid a spike in infections, the government has taken a tougher stance to fight Covid-19 transmission.

The country launched a countrywide vaccination drive on Feb 7. As the daily infection rate keeps rising, the government extended the closure of school and colleges until May 23.

The infection rate has been upward for a number of days now. The government has issued 18 directives to curb the transmission.