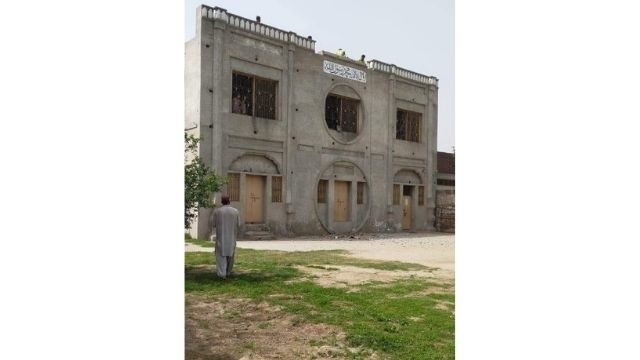 The journalist who reported on it is now himself at risk of being arrested.

Khatam-e-Nabuwat is a radical Barelvi Muslim organization in Pakistan, which opposes any change to blasphemy law and calls for increased repression of the Ahmadis, a religious movement that offers its own interpretation of Islam and is regarded as non-Islamic by Pakistani law.

Not content with the harsh existing anti-Ahmadi legislation, Khatam-e-Nabuwat activists often take the law in their own hands. Last week, journalist Bilal Farooqi tweeted that Khatam-e-Nabuwat members had demolished the dome and minaret of an Ahmadi mosque in Garmola Virkan village, Gujranwala district, Punjab, and also desecrated the kalima (a text on the fundamentals of Islam) inscribed on it. The journalist accused the local police of having actively cooperated with the extremists.

Bilal Farooqi is a well-known journalist in Pakistan. He was already arrested last year for his reporting and posts, and is now under investigation again for having posted on Twitter about the Ahmadi mosque destroyed in Punjab.

But in fact, Khatam-e-Nabuwat had advertised the event itself. One of its members tweeted that “Mujahideen Khatam-e-Nabuwat have saved Islam after demolishing the minarets of Ahmadiyya mosque in Garmula Virkan and erasing the Kalima from the mosque,” and posted a video with militants celebrating after the attack.

Leading international human rights organization have protested the long-lasting persecution of the 2,5 million Ahmadis living in Pakistan, where they are treated as second-class citizens and often attacked by extremist mobs. So far, the Pakistani government has failed to protect them against serious violence and frequent killings.

The case of Garmula Virkan is just the latest one in a long series of incidents where local police have sided with mobs attacking the Ahmadis rather than protecting the religious minority. Journalists who report on the attacks are also at risk.