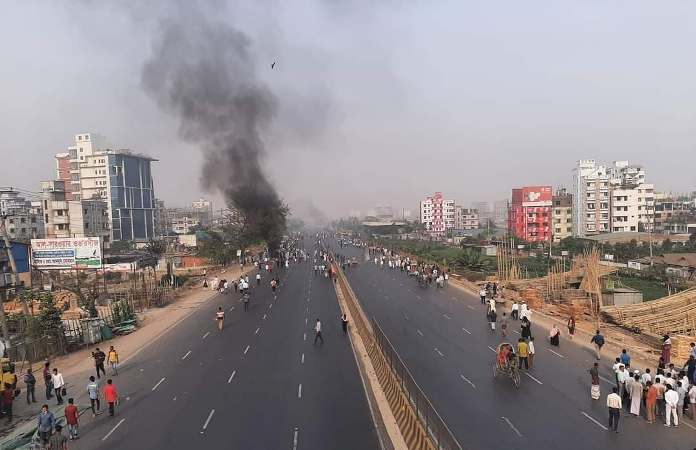 Leaders and activists of Hefazat-e-Islam Bangladesh blocked Dhaka-Chattogram and Dhaka-Sylhet highways as they enforced daylong hartal since Sunday morning protesting police action on their anti-Modi processions in Dhaka, Chattogram and other districts.

Some students of Madaninagar Madrasha put up barricade on DhakaChittagong highway by burning tires from Sanarpar to Shimrail crossing in the morning, disrupting Dhaka’s road communications with Chattogram and Sylhet, UNB reports.

Huge numbers of buses, private cars were seen plying on the streets of the capital.

In Sylhet, the activists of Hefazat-e-Islam brought out processions in different parts of the city including the Court point after Fazr prayers.

No long-route buses left the district in the morning.

The movement of rickshaws and auto-rickshaws was seen normal.

Besides, alongside police, Rab, BGB members and six magistrates will remain vigil to maintain law and order in the city.

SM Abu Farhad, officer-in-charge of Kotwali Model Police Station, no incidence of violence was reported until 10 am.

Hefazat-e-Islam announced the day long countrywide hartal at a press briefing at Purana Paltan in the capital on Friday night.

A clash involving Hefazat supporters and police left four people dead and at least 15 others injured at Hathazari in Chattogram on Friday.

In Dhaka, at least 50 people, including several journalists, were injured in a clash between Hefazat supporters and police in the Baitul Mukarram National Mosque area Friday afternoon.

Clashes erupted when police barred people from bringing out a procession after Jum’a prayers protesting against the visit of Indian Prime Minister Narendra Modi.