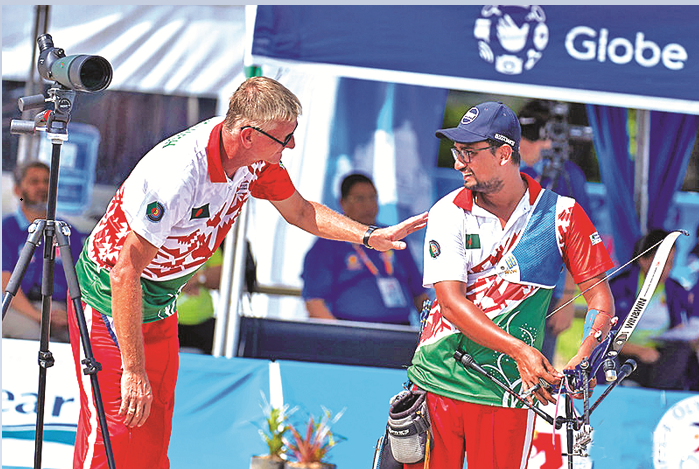 German archery coach Martin Frederick became the head coach of Bangladesh archery team in March 2018 on a five-year contract and since his appointment, Bangladesh enjoyed a lot of success in the international arena. Bangladeshi archers’ winning 10 out of 10 gold medals during the 13th South Asian Games held in Kathmandu, Nepal in December 2019 is one of the biggest highlights of his career with Bangladesh team. Under his tutelage, the country’s top archer Ruman Shana became the first Bangladeshi archer to directly qualify for the Olympics. Recently Martin talked to The Daily Sun on several topics including National championship Cox’s Bazar, the performances of the archers there, about the Olympics and so on.

The Daily Sun: How was your experience in the recent Nat’l Championship in Cox’s Bazar?

Martin Frederick: It was nice. Two good things we got from that competition. Cox’s Bazar, so on the beachside has a little more wind and it made the competition a bit tricky, not so strong but good. And another thing that was very positive that after nearly a one year break, the competition took place. The national competition, international competitions now have started and the players need to follow the routine and that kind of stuff.

The Daily Sun: Haven’t you started work in December?

Martin Frederick: In December, there was one league for the national team and the camp. We had a competition along with a camp for the national team. Now after one year break it was for the whole country. There were long shooting lines, big finals and it was good, it was different.

The Daily Sun: The federation arranged the championship keeping the windy condition in Cox’s Bazar in mind. They wanted to make sure that the archers cope up with such conditions before the Olympics. What’s your thought?

Martin Frederick: It was a good idea from the federation to have the competition there. Because I think 80 percent of all international competitions are held in the winds. But I need a training camp on the condition, not only a competition. We have to try, we have to test and we have to look at what happens in such conditions. You can’t experiment in tournaments so I need to continue that topic but in the training camp.

The Daily Sun: Have you told the federation about it?

Martin Frederick: Yes, the federation knows and they will organise.

The Daily Sun: How do you rate the archers' performances there?

The Daily Sun: What were the reasons behind it? Is it for the windy condition or the long layoff?

Martin Frederick:  First we had a gap for five months in practice. Archery is a field sport and you have to repeat, repeat and repeat every day. So not doing practice in five months and also no competition for one year is surely another reason, possibly the main reason of all. But I think it will be better in the coming days because we have come to a routine again.

Martin Frederick: Yes, in the nationals his performance was not so good. Before the National Championship, he had a little shoulder injury and I needed to make his throw weightless from the bow. The bow has some specific weight to draw the string and I need to make it more down to protect his shoulder. So for that, the equipment was not so perfectly adjusted. Ruman at that moment was not so fluent and it was a little sticky on that performance.

The Daily Sun: Do you think the archers need some psychological counselling to grow up their confidence?

Martin Frederick: Yes, it can be but I prefer to make three steps. Step one is that we now come back to the regular competitions and I also think the risers are more stable and more consistent. And the future of the national team can be good if we also have a psychologist. It is normal for the high-level sport that the national team has a psychologist. But that is not that I cry or miss that at this moment. We should plan that in the future.

The Daily Sun: The Olympics is in July and it is March. What is your next plan?

Martin Frederick: Now it is the Bangladesh Games, three weeks or two weeks. My national team will leave camp next week. Then they go to the organisations to have the last practice with the teams. And then very shortly after the Bangladesh Games, we have a trail for the international competitions. So, after those trails we have a pre-selection for the camp members and the national team will be smaller. Then I think we can also walk more efficiently and then we start with international programmes.

Now for example we have eight recurve men in the national team. After the trial, I may continue with five or six depending on the result. With that selection, the group will be smaller and will prepare for international events. Hopefully, the Asia Cup will be held in May in Bangkok but still not sure. The World Cup has moved from Shanghai to Switzerland, Lausanne. Although it makes the situation complicated for us, I hope we will participate because we need competitions.

The trials will be held one week after the Bangladesh Games in the mid of April. We have a complete event calendar and we have local events also. We have national leagues at the end of April, national rankings, etc, etc.