Modi calls for unity to fight against common threats 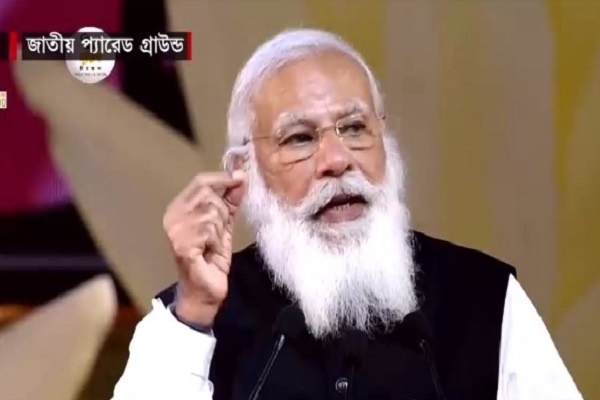 Indian Prime Minister Narendra Modi on Friday called for unity to fight against the ideologies and forces behind inhuman acts like terrorism saying they are active even today.

“The ideologies and forces behind these inhuman acts are active even today. We not only need to be alert, but also need to stay united to fight them,” he said referring to common threats such as terrorism.

“We must remember that though we have similar possibilities in the area of trade and development, we also face similar threats, such as terrorism,” he said.

Modi said both the countries have the power of democracy and a clear vision for moving forward. “India and Bangladesh moving forward together, is equally important for the development of the entire region,” the Indian Prime Minister said.

He was addressing at the special programme marking birth centenary of Father of the Nation Bangabandhu Sheikh Mujibur Rahman and 50 years of Bangladesh’s independence.

“I’m pleased that you’ve included me in the celebrations of this important milestone in the development journey of Bangladesh,” Modi said.

He paid tributes to Bangabandhu, who dedicated his whole life for Bangladesh and its people.

“For us Indians, it is a matter of pride, that we had the opportunity to honour Sheikh Mujibur with the Gandhi Peace Prize.”

Speaking at the National Day programme of Bangladesh. https://t.co/ka54Wleu7x