4 killed, dozens injured in clash with police in Hathazari 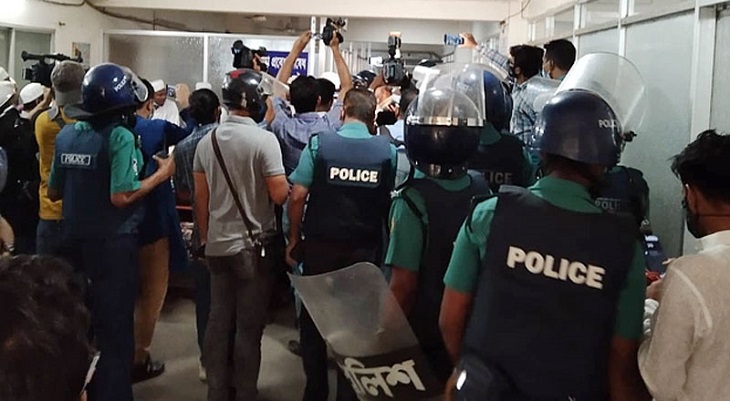 At least four people, including three madrasa students, were killed and over 50 others injured in a series of clash between anti-Modi protesters and police in Dhaka and Chattogram on Friday.

In Chattogram, Hefazat-e-Islam activists attacked a police station and clashed with police in Hathazari upazila of the district in the afternoon.

Hefazat activists, mainly students of Hathazari Madrasa, carried out the attack on Hathazari police station during their rally brought out in protest against the arrival of Indian Prime Minister Narendra Modi in Bangladesh.

The protesters vandalised local Land Office and set a vehicle, files and furniture on fire. They also ransacked local Dak Bungalow during the attack.

Sources said several thousand students of Al Jamiatul Ahlia Darul Ulum Moinul Islam Hathazari Madrasa brought out a rally around 2:00pm in protest against the arrival of Narendra Modi and the ‘attack’ on their leaders and activists in Baitul Mukarram area in Dhaka.

The students went to Hathazari police station, some 500 metre off the madrasha, chanting slogans in a procession.

At one stage, they started pelting brick bats to the police station, damaging the glass-made doors and furniture of it, said the sources.

Police opened fire to disperse the unruly students, resulting in a chase and a counter-chase and a violent clash.

A good number of people, including madrasa students, were injured in the clash.

Eight of the injured were rushed to Chattogram Medical College Hospital where doctors declared four of them dead, said Sub-Inspector Jahirul Islam Bhuiyan of the hospital police outpost.

Later, police brought the situation under control while the students took position in front of the madrasha suspending traffic movement through the busy Chattogram-Khagrachhari highway.

Additional Superintendent of Police (North) Md Mosiuddowla Reza said the students carried out the attack without any provocation.

They caused huge destruction at the police station compound, he said.

Hefazat-e-Islam Organising Secretary Azizul Hoque Islamabadi said there was no prescheduled programme of Hefazat on Friday.

“Police attacked our leaders and activists in Baitul Mukarram area in the capital. The students brought a procession, protesting the attack, but police opened fire on the rally resulting in the casualties,” he said.

A tense situation was prevailing in Hathazari area till filing of this report at 7:30pm.

In Dhaka, at least 50 people, including journalists, were injured in a clash between police and anti-Modi protesters in Baitul Mukarram National Mosque area.

The injured journalists are Ishtiak Emon of Ekattor TV, M Jahangir Alam of UNB, Probir Das and Amran Hossain of the Daily Star. They are receiving treatment at Dhaka Medical College Hospital.

M Jahangir Alam was hit by a rubber bullet. Prabir’s arm has been fractured while Amran has received head injuries.

Police waylaid them when they tried to bring out a procession. The protesters threw stones at police.

At one stage, police fired several rounds of teargas shells to bring the situation under control. Several motorcycles were also burnt in front of the south gate of the national mosque.

A group of men wearing helmets and armed with sticks were also seen at the scene tried to stop the anti-Modi protesters.

At least 50 people were injured, including journalists, in the clash. They were rushed to Dhaka Medical College Hospital.