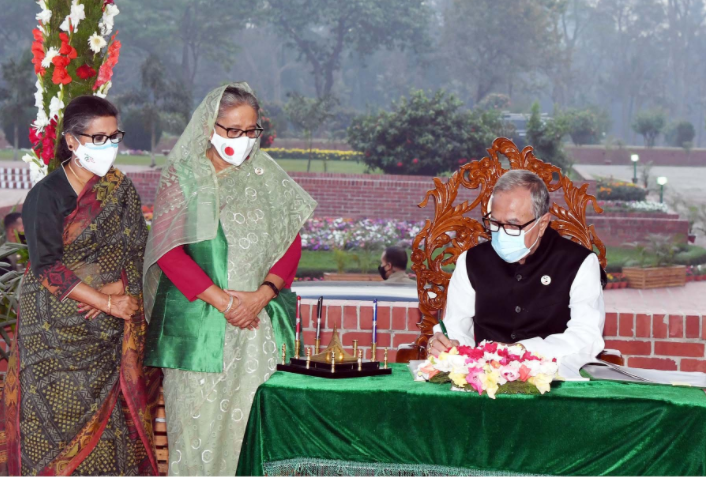 President M Abdul Hamid said on Friday that Bangladesh would not have been independent if Bangabandhu was not born.

“Bangladesh would have never been born without Mujib,” the President told a televised interview, conducted by President’s Press Secretary Md Joynal Abedin this afternoon.

Hamid, a very close aid of Bangabandhu and one of the sub-sector commanders of the 1971 Liberation War of Bangladesh, categorically said it cannot be accepted under any circumstances that Bangladesh would become independent if Bangabandhu was not born.

Asked about any difference between Bangabandhu and Independence (Swadhinata), the senior politician said the Father of the Nation Bangabandhu is closely related with the history of Bangladesh at all stages as he had immense contribution to the establishment of Pakistan.

“Subsequently Bangabandhu had played the strong role in every step, since from the 1952 Language Movement to the 1970 elections with no compromise . . . He did not bow down his head on the question of the Bengali people’s rights,” Hamid observed.

The President said, “I sincerely believe that it was indeed Allah’s will as He created a person like Bangabandhu only to make Bangladesh independent and ensure rights of the country’s people.”

Referring to the Father of the Nation’s historic March 7 speech in 1971, Hamid highlighted a vivid picture of the struggle that Bangabandhu had to face in his life since the creation of Pakistan.

Targeting country’s young generation on the eve of Bangladesh independence’s golden jubilee and Bangabandhu’s birth centenary, he said, “We fought to make the country independent for the ideals and goals.”

Abdul Hamid expected that the young generation would take the country forward being imbued with the ideology of the 1971 War of Liberation.

The new generation will take the country forward so that the people of other countries can follow our moral character, principles and ideals as the role model, he hoped.

Reminiscing Bangabandhu’s prison life, President Hamid said, “When Bangabandhu was arrested and taken to Pakistan, I thought he would be buried in a Pakistani jail, even next to his cell.

“Yahya Khan took Bangabandhu out of jail in mid-November and Zulfikar Ali Bhutto was also there. There were many more army generals. But when Yahya Khan extended his hands to shake his hand, Bangabandhu then said, ‘I cannot shake hand with the hands that were tainted with the blood of Bengali people’.”

Replying to a query, several times elected lawmaker Abdul Hamid said he took part in the 1970 elections being instructed by Bangabandhu and was elected as the youngest member of the Pakistan National Assembly.

On 26 March 1971, Bangabandhu declared the much-desired independence of the Bengalis, the head of the state reminisced about those turbulent days of 1971 and Bangabandhu’s direction and preparations for the War of Liberation.

Recalling the fiery days of the 1971 Liberation War, the President continued “We did so much but didn’t really know what was going on actually. We were in the dark. There was no communication. Then I thought if I would go to Agartala, I would be able know something.

“I got about 25-26 MPs from Cumilla, Chattogram and Noakhali. At that time there was talk of forming a government in Calcutta. Communication was being done from Agartala to Kolkata. Talks were held in Agartala. We agreed on Tajuddin as the Prime Minister, Syed Nazrul Islam as the Vice President and Bangabandhu as the President. Then on the 19th I went to Mithamin via Agartala. Then on May 31 I left home again.”

Answering to the question on ‘How did you feel after receiving the news of Pakistan’s surrender?’, the President said, “The feeling after the message that the country got independence could not be expressed in words. What a joy it was, it seemed like there could be nothing more powerful in the world. We are independent. We are free. We have been able to bring the freedom for which we have done much, suffered a lot by paying much blood, waging struggle and movement and enduing jail-oppression-torture. There can be no greater thing to achieve.”

Regarding the post-independence situation and the reconstruction of the country, the President said, “Father of the Nation Bangabandhu returned on January 10, 1972 . . . I also came back on the same day. We have worked under the leadership of Bangabandhu to rebuild the country by staying in the destroyed country.

When asked ‘how much has the expectation with which you took part in the Liberation War been fulfilled in the golden jubilee of independence, the Independence award-winning personality Hamid said, “the 50 years of independence have passed. If Bangabandhu had not been killed at that time, we could have done it 20 years ago.”

The head of the state added: “Even today we have come a long way under the farsighted leadership of Bangabandhu’s daughter Prime Minister Sheikh Hasina and we have improved a lot.”