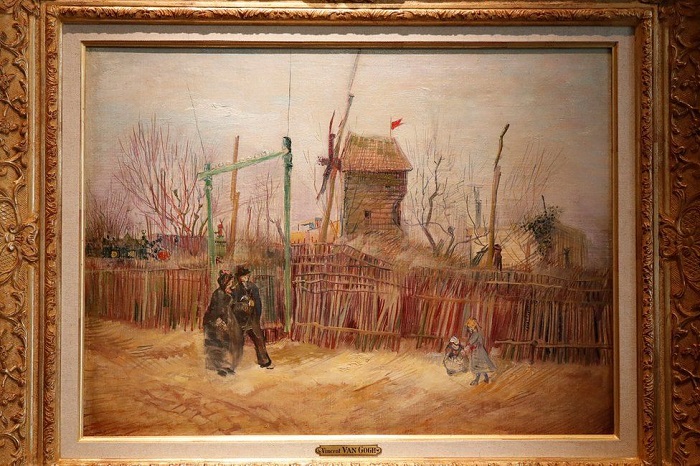 A Vincent Van Gogh painting of a Paris street that spent more than 100 years behind closed doors has fetched 13.09 million euros (£11.2m) at auction.

Sotheby's said the sale price was a record for the Dutch artist in France, where Thursday's auction took place.

It had previously estimated A Street Scene In Montmartre could fetch up to eight million euros (£6.9m).

Painted in 1887, the piece has been owned by a French family for most of the time since.

Specialists knew of the work but it was only catalogued as a black-and-white photograph.

A slightly higher price was reached for the painting on Thursday afternoon, but the sale was scrapped due to issues with online bidding.

It was offered again at the end of the auction, which was live-streamed on the internet by Sotheby's from Paris.

A Street Scene In Montmartre is one of a series of works Van Gogh created while lodging in Paris with his brother Theo in 1886 and 1887.

The painting portrays one of the windmills that dotted Montmartre at a time when it was just a village on the northern outskirts of Paris.

The famous Sacré-Cœur church that now dominates the area was under construction at the time.

Van Gogh expert Martin Bailey told BBC News last month the painting was "a transitional work between Van Gogh's Dutch years, when he painted in dark, earthy colours, and the exuberant works that he did in Provence.

"It was in Paris that he discovered the Impressionists, and this led him to explore colour," added Mr Bailey, who writes a blog on Van Gogh for The Art Newspaper.

"What is exciting is that it is a Van Gogh painting which has been hidden away ever since it came off the artist's easel," he continued.

"It has always been in private collections, so only the owners and their friends knew it."

According to Mr Bailey, the scene depicted in the painting was only a short walk away from the apartment where Vincent and his brother were then living.

"By his time the mills had become an entertainment centre," he went on. "No doubt Vincent would occasionally drop by for a drink, when he had a few francs in his pocket."