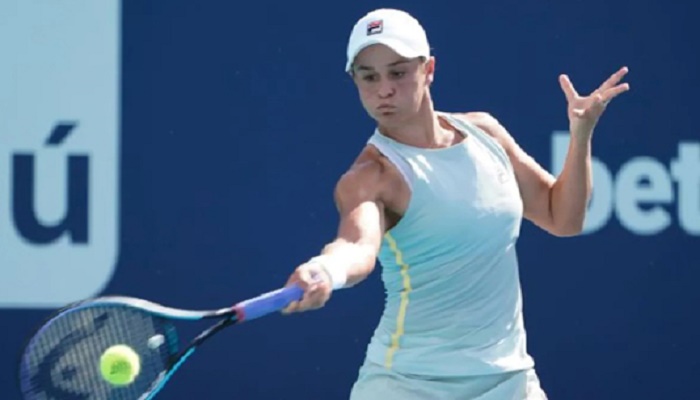 Australian world number one Ashleigh Barty saved a match point as she battled back to defeat Slovakia’s Kristina Kucova on Thursday and reach the third round of the ATP and WTA Miami Open.

Barty fired 15 aces, two in a rally from 0-40 down in the final game, to defeat Kucova after two hours and 27 minutes.

“It was important in that match to stick to working and trying to figure it out as I went on. (I’m) just really happy I never gave up and happy I gave myself a chance to stay in the hunt.”

The 24-year-old Aussie avoided her first three-match losing streak since 2014 after having fallen to Czech Karolina Muchova in last month’s Australian Open quarter-finals and American Danielle Collins at Adelaide the following week.

Kucova, whose only win over a top-10 foe came five years ago, forced a third set after Barty sent a forehand long to surrender the lone break of the second set.

In the third, Barty sent a backhand wide to give Kucova a break in the fourth game and a 3-1 edge and they both held serve until Kucova served for the match leading 5-3.

On Kucova’s only match point, she missed a weak first serve and Barty smashed the second for a down the line winner.

Kucova sent a backhand long two points later to surrender a break and Barty held then broke for a 6-5 edge only to make three errors to put herself one point from a tie-breaker.

Instead, Barty blasted back-to-back aces up the middle and a backhand winner then swatted a service winner on her first match point for the triumph.

“Mentally you need to stay there to give yourself a chance,” Barty said. “I was proud I was able to hang in there when mentally I could have gotten a little loose.”

Only Japan’s second-ranked Naomi Osaka can overtake Barty for the world number one spot at Miami.

Osaka, who won her fourth Grand Slam title at the Australian Open in February, launches her campaign on Friday in a second-round clash with Australian Aja Tomljanovic.

The two-time Grand Slam champion from Romania, ranked third in the world, was playing her first match since a quarter-final loss to Serena Williams at the Australian Open.

After Garcia pocketed the first set with an ace on set point, she broke Halep to open the second and saved three break points to extend her lead to 2-0.

But Halep regained the break to knot the set at 3-3, and after breaking Garcia again in the 10th game roared through the third set.

“The score, it’s a little bit different than the match was, because (a) few games were really close and tough,” said Kerber, who next faces another former world No. 1 in Victoria Azarenka.

Azarenka advanced by walkover after a knee injury forced Laura Siegemund to pull out of their scheduled match.

Men’s seeds swing into action Friday, led by top-seeded world No. 2 Daniil Medvedev, who takes on Taiwan’s Lu Yen-Hsun in the second round.

Russia’s Medvedev, runner-up to Novak Djokovic at the Australian Open, overtook Rafael Nadal for No. 2 in the world after his triumph in Marseille earlier this month.