17 killed in bus-microbus collision in Rajshahi 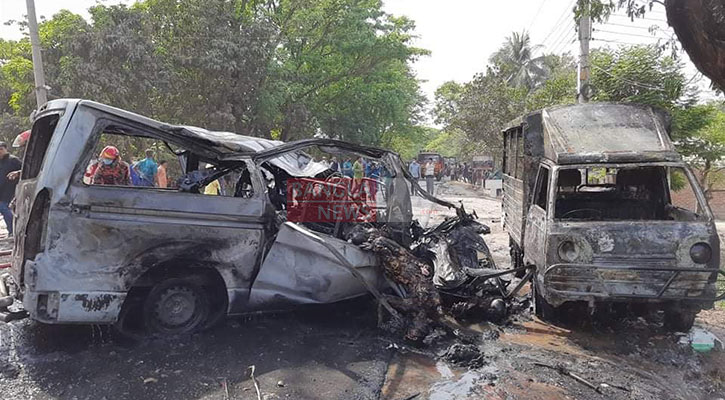 At least 17 people, including all passengers of a microbus, have been killed after a collision with a passenger bus followed by gas cylinder explosion in Rajshahi.

The tragic accident occurred at 2:00pm on Rajshahi-Dhaka highway in Katakhali area.

Explosion of the cylinder of Hiace microbus damaged the vehicle almost completely. All passengers of the microbus got trapped and turned into fossils.

According to police and local account, the collision between two vehicles caused the cylinder explosion resulting in death of 17 people including all passengers of the microbus.

Members of the local administration, law enforcing agencies and fire service and civil defence rushed to the spot. They are trying to trace the bodies of the victims.

Injured passengers of the bus were sent to Rajshahi Medical College and Hospital for treatment.

The deceased were identified as Salahuddin and his wife Kamrunnahar, Kamrunnahar's sister Shamsunnahr and their children Sazid and Saba.

They were from Rangpur's Razarampur village under Pirganj police station. Besides, Boro Mazidpur village's Ful Miah also died along with his family members.

They deceased are Ful Miah's wife Nazma and their children Sumaiya, Sadia and Foysal. Another victim was identified as Mokhlesur Darika village.