US and UK ratchet up sanctions on Myanmar's military 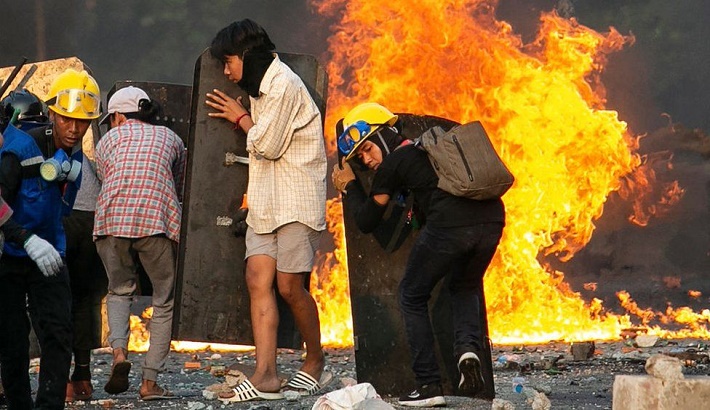 The US and UK have imposed sanctions on Myanmar's two military conglomerates in a move that significantly ratchets up pressure on the country's leadership.

The US Treasury has now added the two companies to a blacklist, freezing any assets they have in the US and banning US individuals and businesses from trading with them.

The UK has imposed sanctions on MEHL.

"These actions will specifically target those who led the coup, the economic interests of the military, and the funding streams supporting the Burmese military's brutal repression," Secretary of State Antony Blinken said. "They are not directed at the people of Burma.

Human rights groups and democracy activists have long pushed for sanctions against the two conglomerates, arguing that they fund the military's repression of protestors.

But the US is the only major power so far to impose sanctions on the two businesses, while Myanmar's biggest trade partners in Asia have rejected sanctions.

Critics worry that the increased pressure won't be enough to force change.

"The leverage is not really there," said Richard Horsey, a Myanmar expert with the International Crisis Group.

One example that lays out the complexity of imposing sanctions and enforcing them is Golden City, a Yangon mixed-use development with an unobstructed view of the city's most famous landmark Schwedagon Pagoda.

The activist group Justice for Myanmar says the development is a cash cow for Myanmar's military that channels millions into the military department "which buys weapons of war that are used on the people of Myanmar in the commission of war crimes and crimes against humanity."

Singapore-listed company Emerging Towns and Cities (ETC) - which owns a 49% stake in the development through a number of local companies - halted trading in February after Justice for Myanmar published the allegations, and the stock exchange demanded the company explain its part in the project.

The company admits its partner in Myanmar has ties to the military. It makes lease payments for Golden City into an account administered by the Quartermaster General's Office, which reports to the Ministry of Defence.

But ETC denies those funds could have been used to commit human rights abuses, saying that under Myanmar law, the Quartermaster General must turn over all funds to the government's budget account. And it told the Singapore stock exchange (SGX) that's where its responsibilities end.

"The company is entitled to assume that the application of funds administered by Myanmar government ministries is in conformity with existing provisions of Myanmar law, and as such, makes no comment on the actual use of the lease payments it is obligated to make," ETC said in its responses to questions from the SGX.

The company suspended trading in early March on the Singapore exchange while it seeks out an "independent" review to clarify its dealings in Myanmar to investors.

The row over the development is a reflection of the fragmented international response to the 1 February coup. Activists might cause headaches for ETC, but the company can't be in breach of sanctions because Singapore hasn't imposed any.

Both critics and proponents of a tougher approach agree that up until now the sanctions - which only targeted Myanmar's top brass - have been fairly weak.

"The Myanmar military are not going to fall down on the floor, cry and say 'oh my god, I've lost my visa to the US, my life is over'. They'll probably laugh," said Kishore Mahbubani, a former Singapore diplomat and a Distinguished Fellow at the Asia Research Institute at the National University of Singapore.

More broadly, sanctions as a policy tool have a patchy record. Researchers from the Peterson Institute for International Economics (PIIE) evaluated over 200 cases and found that only a third were a complete or partial success. Others using the same data put the hit rate at just 5%, arguing the PIIE researchers were too generous in their definition of success.

Their track record in Myanmar - which was not part of the PIIE study - is hotly debated. Some say they played a key role in forcing the military regime to release Aung San Suu Kyi and reopen the country a decade ago, while others say they either weren't significant or only made a difference after the ruling junta decided to change course.

Gary Hufbauer, who led the PIIE's research, said sanctions tend to have a higher chance of success against poor countries like Myanmar. But they tend to be most successful when the goals are modest, the target countries are not autocratic, and they lack external "black knights" who might throw their economy a lifeline.

Could sanctions hurt more than they help?

Previous sanctions on Myanmar have had a humanitarian impact. For example, the US state department estimated that a 2003 US ban on Burmese textile imports cost 50-60,000 jobs (although orders from the EU mitigated the effect).

Mr Horsey worries that ordinary people rather than the government could again pay the price, especially if the sanctions turn into a broader attempt to bankrupt the state. But human rights groups say the current sanctions are more targeted than those Myanmar faced previously, and point out that democracy activists in Myanmar are themselves boycotting military-linked companies.

"We're not doing anything that the Myanmar people aren't doing themselves," said Phil Robertson of Human Rights Watch.

If sanctions are aimed at hurting the military without shutting down the economy, the question then becomes whether or not foreign businesses can still operate in Myanmar while tiptoeing around the two conglomerates.

Htwe Htwe Thein, an Associate Professor of International Business at Curtin University in Perth, said the two businesses are not all-encompassing, and many consumer goods companies could probably continue to operate. But the same isn't true for Myanmar's resources sector.

"The ownership of the military is rampant in there. It's everywhere in the extractive sector," she said.

But if sanctions force western oil and gas companies to withdraw, Mr Horsey expects that businesses from China or Thailand would replace them.

"If companies like Woodside and Total are forced to divest, they're going to have to sell off their assets rather cheaply, and it's pretty obvious who's going to buy them up," said Mr Horsey.

Asean versus the West

China and Thailand account for more than half of the country's trade volume, while Singapore is the single largest foreign investor, generating $11bn over the past five years according to Myanmar government figures.

While the Association of Southeast Asian Nations (Asean) has called for a peaceful resolution to the crisis, the group has flatly rejected sanctions.

Mr Mahbubani argues that quiet diplomacy behind the scenes could accomplish more.

"It's the southeast Asian way of avoiding confrontation. And frankly, you have to acknowledge that has kept Southeast Asia at peace for 30, 40 years now, finding diplomatic solutions, talking to each other and changing people's minds," he said.

"If it was left to Asean, nothing would happen at all," he said.

"And the idea that they're somehow going to be part of the solution is rather laughable".

Mr Mahbubani sees it very differently. He thinks the west's brash, critical approach during the Rohingya crisis, loudly condemning Aung San Suu Kyi for her reluctance to act, may have convinced the military that they could move against her because she no longer had allies. And he thinks it's unlikely that sanctions will change their mind now.

"They are very stubborn people. The more public pressure you put on them, the more they'll dig their heels in," he said.