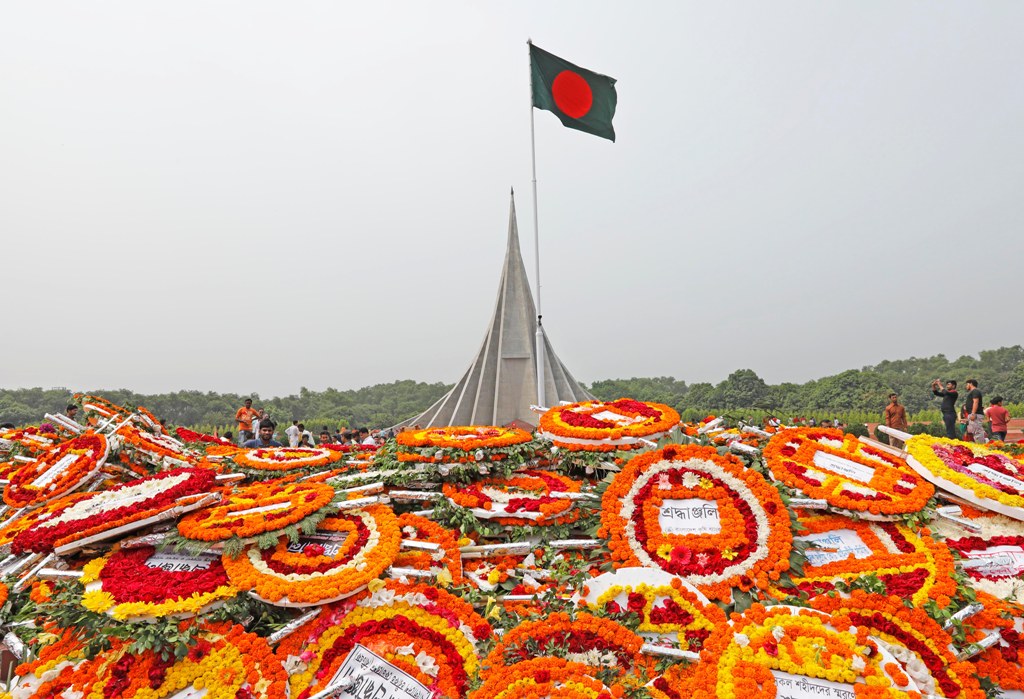 The nation celebrating the 50th Independence and National Day on Friday coinciding with the grand celebration of the birth centenary of Father of the Nation Bangabandhu Sheikh Mujibur Rahman and golden jubilee of independence.

The grand celebration of the birth centenary of Bangabandhu and the golden jubilee of Bangladesh’s independence, which marked the physical attendance of five heads of states and governments and virtual attendance of other global leaders, started on March 17 at the National Parade Square in Dhaka in the presence of Maldivian President Ibrahim Mohamed Solih.

The 10-day grand celebration will end today following the celebration of the country’s 51st Independence and National Day with the attendance of Indian Prime Minister Narendra Modi in person as the guest of honour.

Marking the 50th Independence and National Day, the government has taken elaborate programmes maintaining the health guidelines in view of the global pandemic coronavirus.

The National Memorial at Savar is the main venue of the celebration of the day where President Md Abdul Hamid and Prime Minister Sheikh Hasina placed wreaths early in the morning as a mark of profound respect to the memories of the martyrs.

People from all walks of life, including families of Bir Shreshthas, war wounded freedom fighters, members of the diplomatic corps, leaders of different political parties, social, cultural and professional bodies, also laid wreaths at the national memorial in the morning of the day.

The day’s programmes began by heralding a 50-gun salute early in the morning as a mark of profound respect to the heroic struggle of this nation, which suffered a protracted subjugation under foreign rules from time to time till achieving their coveted Independence in 1971.

The national flag is being hoisted atop all government, semi-government, autonomous and private buildings with the rises of sun while all streets and important city intersections will be decorated with national and multi-coloured miniature flags and festoons.

Important buildings and establishments as well as city streets and islands are being illuminated with colourful lights.

Liberation War based documentaries and movies will be screened at cinema halls across the country maintaining the health guidelines, including wearing face masks.

Special prayers will be offered in all mosques, temples, churches and other places of worship across the country seeking divine blessings for the eternal peace of the departed souls of Father of the Nation, four national leaders, martyrs of the War of Liberation and all other patriotic sons of the soil.

Improved meals will be served to the inmates of hospitals, jails, old homes and orphanage centres to mark the day. The country’s all children’s parks and museums will remain open for all.

All children parks and museums will remain open for all in terms of maintaining health guidelines while neval ships of Bangladesh Navy and Coast Guard will be exhibited at Chattogram, Khulna, Mongla and Payra ports and the jetties of Bangladesh Inland Water Transport Authority (BIWTA) in the city’s Sadarghat, Pagla in Narayanganj, Barishal and Chandpur from 2pm until the sun sets.

The missions abroad will also celebrate the day through similar programmes.

Different political parties including ruling Awami League as well as socio-cultural and professional organisations have also taken various programmes to observe the day in a befitting manner.