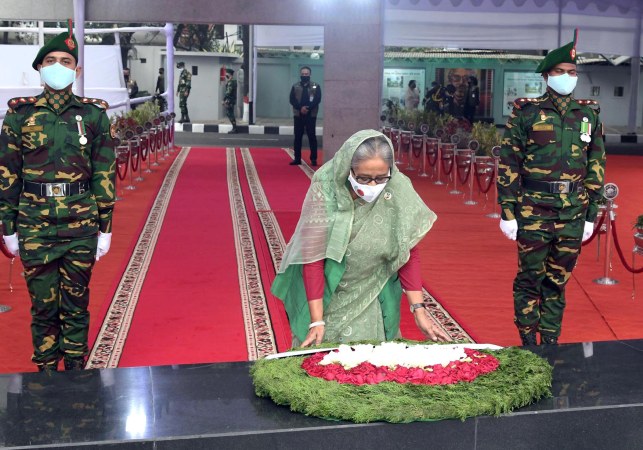 Prime Minister Sheikh Hasina paid rich tributes to Father of the Nation Bangabandhu Sheikh Mujibur Rahman on Friday morning on the occasion of the 51th Independence and National Day.

On her return from the National Memorial at Savar, the Prime Minister paid the homage to Father of the Nation by placing wreaths at his portrait in front of Bangabandhu Memorial Museum at Dhanmondi 32 in the capital.

After laying the wreath, she stood in solemn silence for some time as a mark of profound respect to the memory of Bangabandhu, also the architect of independence and the greatest Bangalee of all times.

A smartly turned out contingent drawn from the Bangladesh Army, Bangladesh Navy and Bangladesh Air Force presented a state salute on the occasion when the bugles played the last post.

Later, the Prime Minister along with her younger sister Sheikh Rehana entered the Bangabandhu Memorial Museum and placed a wreath at the stair where the blood strained and bullet-riddled body of the great leader fell at the black night of August 15.