Don’t allow development and democratic progress to be disrupted: PM 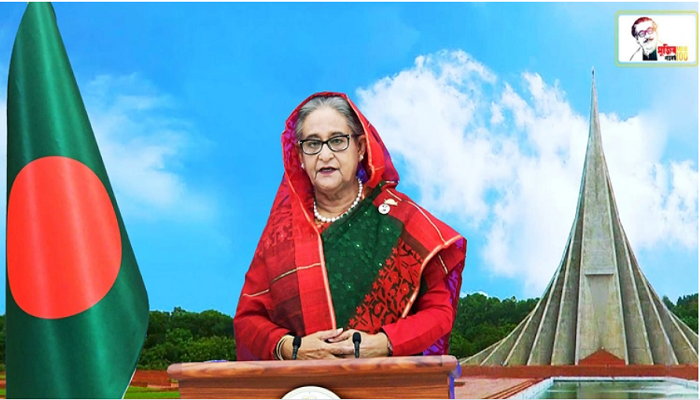 Prime Minister Sheikh Hasina on Thursday urged people to take a vow afresh not to allow anyone to hinder Bangladesh’s democratic and development progress by playing ducks and drakes with their fate.

“On this auspicious occasion of the Golden Jubilee of Independence, we’ve to vow afresh that no one can play ducks and drakes with the fate of the people of Bangladesh. No one can hinder the country’s democratic and development progress,” she said.

The Prime Minister was addressing the nation on the eve of Independence Day 2021.

The Prime Minister called upon people to work for building Bangladesh as a developed, prosperous and non-communal Sonar Bangla (Golden Bengal) as dreamt by the Father of the Nation.

“Let’s build Bangladesh as a developed, prosperous and non-communal Sonar Bangla by forgetting all the differences and being imbued with the spirit of the Liberation War,” she said.

Sheikh Hasina said Bangladesh has achieved an unimaginable success in the socio-economic index as a result of her government’s tireless works over the past 12 years.

“Bangladesh has not only surpassed its neighbours in various indexes like life expectancy, gender equality, universal primary education, women education, women's political rights, women and child mortality, sanitation and food availability, but also exceeded many developed countries in many cases,” she said.

But the path of this development has not been smooth at all as the anti-liberation forces inside and outside the country carried out various ill-motivated activities to hinder the progress of Bangladesh. “This process still continues. So, we all will have to resist all the anti-state attempts by playing the role of vigilant watchdogs.”

Sheikh Hasina said passing half a century of independence is a significant milestone for the life of a nation.

“For us, this Golden Jubilee celebration has become more colorful as Bangladesh Awami League, forming the government, started running the government with the ideology of Liberation War. Today, Bangladesh has stood raising its head in the world as a proud country proving all the negative and pessimistic predictions against Bangladesh wrong, she said.