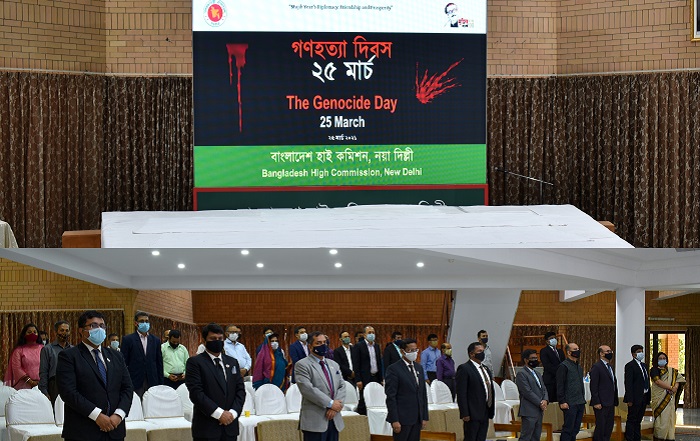 Bangladesh High Commission in New Delhi has observed the Genocide Day remembering horridness of the onslaught which was carried out by Pakistani occupation soldiers in Dhaka on March 25, 1971killing of innocent Bengalis.

The programme began on Thursday with a moment of silence in remembrance of the Bengalees who were killed in the fateful night of 25 March as well as the martyrs of the liberation war of Bangladesh.

Reading out of the messages from President Md Abdul Hamid and Prime Minister Sheikh Hasina on the occasion of the Genocide Day, screening of a documentary on the 1971 Genocide by the Pakistan Army and a discussion on the significance of the day were the highlights of the programme.

At the discussion, Minister (Consular) of the High Commission Selim Md Jahangir said that in the name of 'Operation Searchlight’, the Pakistani aggressors wanted to stop the resistance of the independence-seeking people and committed the most brutal killings in the history throughout the country.

“Father of the Nation Bangabandhu Sheikh Mujibur Rahman was arrested by the Pakistani army in the early hour of 26 March 1971 but before that he declared the Independence and with the direction of Bangabandhu Bangladesh achieved victory on 16 December 1971,” he said.

Acting High Commissioner Rokebul Haque in his remarks said, "Observing this day as the genocide day is a recognition of the great sacrifices made by the Bengalees during the liberation war of Bangladesh."

He remembered with deep reverence all the martyrs who were killed during the liberation war of Bangladesh. He also remembered the Father of the Nation Bangabandhu Sheikh Mujibur Rahman with profound respect under whose leadership Bangladesh achieved Independence through a nine-month long blood stained war. He claimed that the horrific genocide of 1971 is a black day not only in the history of Bangladesh but also for the entire humanity.

At the end of the programme, a special prayer was conducted for the salvation of the departed souls of all the martyrs of the liberation war of Bangladesh.