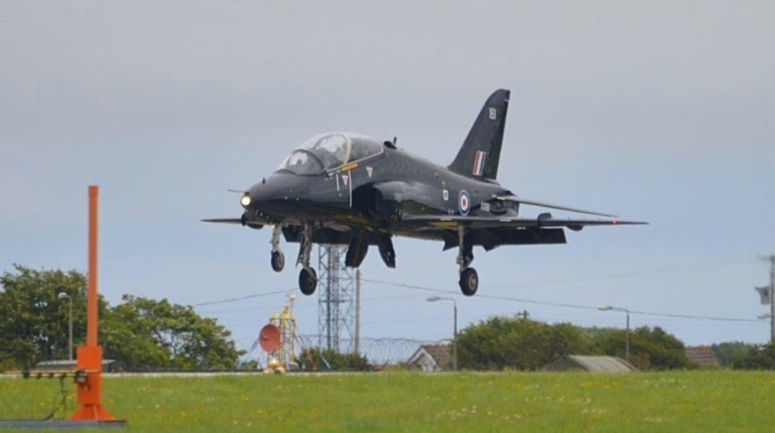 A Royal Navy Hawk T1 jet has crashed in a field in Cornwall.

Two pilots ejected from the aircraft from the 736 Naval Air Squadron based at RNAS Culdrose, the Ministry of Defence (MoD) confirmed.

The pilots were checked by critical care paramedics at the scene, Cornwall Air Ambulance said. They were then airlifted to hospital.

Defence Minister Johnny Mercer said the crash was due to "suspected engine failure".

He added that both pilots were "being assessed for injuries".

"There's nothing more to it than that," he said. "They've had a problem, they've ejected, they've been picked up."

"We're assessing them and we'll have more information in due course."

Police said they received reports of an aircraft crashing in the St Martins area of Helston and have asked people to avoid the area.

Eyewitness Simon Brown, who was walking his dog nearby, said he first heard a "bang as the crew ejected" and saw the plane continue flying, but he didn't see any smoke.

He said: "At first I thought it was an exercise. Later the coastguard helicopter flew over, a few minutes later a smaller helicopter."

Another eyewitness, Richard Cooper, said: "There's no plane in view, it's gone through a load of trees and down a valley into a wooded area. There's a handful of broken branches.

"It seems a little chaotic down there at the moment but they seem to have it all under control.

"There was a strong smell of fuel when I first arrived but that's gone now."