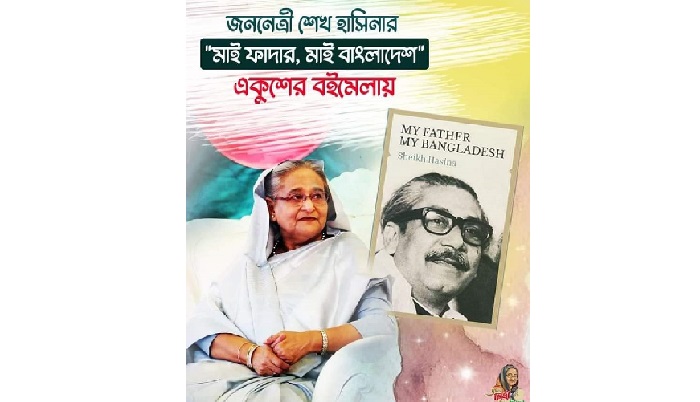 Published by Agami Prokashani on the first day of Book Fair in Dhaka, the book contains translations of seven selected essays from the book ‘Sheikh Mujib Amar Pita'

The book has been translated by Sunandan Roy Chowdhury and the cover has been designed by Sabyasachi Mistri. Islamic University Former vice-chancellor, Bangabandhu Researcher and fictionist Prof Dr Rashid Askari edited the book.

The articles are Bangladesh wins Freedom, My Father Sheikh Mujibur Rahman, Memories of Tungipara and the future of rural Bangladesh, the murder of Sheikh Mujib and the attack on our young nation, the house on Dhanmondi 32 and a pilgrimage of the nation.

The bangla edition of the book was first published in 1999 at Kolkata book fair. The book fair was then inaugurated by Prime Minister Sheikh Hasina.

"A Kolkata-based Publishing house Sahityam published the book in the fair. The Bangladesh edition of the book was first published at the Amar Ekushey Book Fair in February, 2015.

Sheikh Mujib Amar Pita is a memoir and a short autobiographical writings of Sheikh Hasina which contains many untold spheres of Bangabandhu's life and the history of struggle of the leader Sheikh Hasina.

Dr Rashid Askari said, " It's a great pleasure to work on anything related to Bangabandhu, Sheikh Hasina and Bangladesh's independence. The book explores many new aspects of Bangabandhu's  personal and political life and of our independence struggle. I wish the present generation diaspora Bangladeshi across the globe would know Bangabandhu and Bangladesh in a better way."