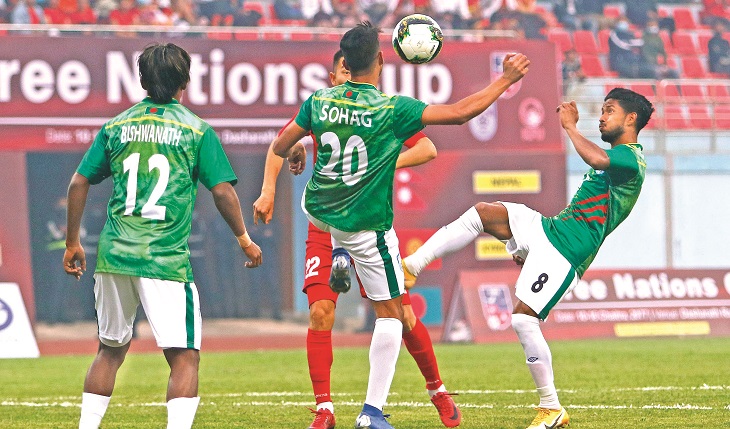 Bangladesh players fight for the ball during their opening match of the Three Nations Cup against Kyrgyzstan U-23 team Dasharath Rangasala Stadium in the Nepalese capital Kathmandu on Tuesday. –BFF photo

Bangladesh national team head coach Jamie Day expressed his satisfaction with the performance of three newcomers against Kyrgyzstan U-23s during the first match of the Three Nations Cup in Kathmandu, Nepal.

“I’m satisfied. They did very well,” Jamie told The Daily Sun on Wednesday.

“Rimon and Royal (Mehedi Hasan) played very well but Royal got a little bit tired in the second half. We took him off.

“International level is a little bit different and a little bit quicker. That’s always happened with new players. Sohag defended well when we needed it,” he added.

Bangladesh won the game 1-0 after Kyrgyzs defender Kumarbaj Uulu Baiaman scored an own goal in the 30th minute.

“As I said before, we are looking for different players and giving opportunities to new players in these games. Obviously, when we win, everyone will be very happy. But we are not any more nervous, not worried about the results,” Jamie added.

Bangladesh will face hosts Nepal in their second match on March 27 at the same venue.

The booters completed gym, pool and stretching sessions at the team hotel on Wednesday. They will resume practice today at ANFA ground.

The men in red and green have already brightened their chances for the final with the win against Kyrgyzstan U-23s. If Nepal beat Kyrgyzstan in their match on March 25, both Bangladesh and Nepal will reach the final with one match to spare.

Jamie further said that he will make some changes in the playing eleven against Nepal.

“Nepal will be stronger this time. Last time, five or six players didn’t travel to Bangladesh. They will have home support as well. It is going to be an extremely tough game. There will be some changes in the squad.  If we reach the final maybe then we took the best team to play in the final,” he said.

Bangladesh, however, suffered a big blow as their key defender Bishwanath Ghosh ruled out of the tournament with a serious muscle injury. Bishwanath left the field on a stretcher in the 70th minute of the game and he will return to Dhaka today.

“We got his MRI report today (Wednesday) and he has a big injury in his muscle. Doctors suggest him to take at least two-week rest,” said team manager Iqbal Hossain.

“He needs proper treatment now so we have decided to send him back to Dhaka. We have already submitted our 23-member final squad. There will be no chances to call a new player now,” he added.