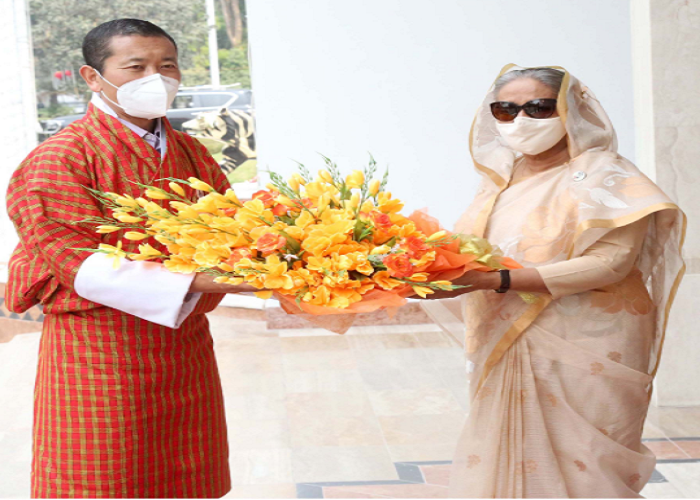 Prime Minister Dr Lotay Tshering on Wednesday said he is here in Bangladesh to listen to the story of Bangladesh sitting next to Prime Minister Sheikh Hasina, an inspiring leader and a mother like figure.

"I’ve come here to listen to the story of Bangladesh, that too seated next to Her Excellency Prime Minister Sheikh Hasina, an inspiring leader and a mother-like figure to me," he said.

Exactly 50 years ago, the Bhutanese Prime Minister said a nation was born amid strife and turbulence, and it went on to make a remarkable progress.

While Bangladesh shares its story of success with the world, Bhutan as the first country to recognise its independence, joins the celebration.

Besides the Golden Jubilee of its Independence, Bangladesh also marks the birth centenary of the person behind it -- Bangabandhu Sheikh Mujibur Rahman.

Conveying warm greetings and prayers of the King and the people of Bhutan, Prime Minister Dr Lotay Tshering, during the event held at National Parade Ground in Dhaka, said it was always a delight to return to Bangladesh, but the reason this time was even more compelling.

Lyonchhen said such significant occasions uplift the spirit of not just the people of Bangladesh but the entire region at a time when COVID-19 pandemic has claimed many precious lives and disrupted livelihoods of millions around the world, he said.

He also applauded Bangladesh's efforts to manage the pandemic, despite sheer size of the population.

"While we’ve many bilateral engagements, the purpose of my visit this time is solely to pay tributes to Bangabandhu Sheikh Mujibur Rahman and his heroic legacies that laid strong foundations for a peaceful, progressive, and prosperous Bangladesh," said the Bhutanese Prime Minister.

With a few reiterations in Bengali, he thanked Bangladesh for giving him and the people of Bhutan an opportunity to be a part of the journey.

Meanwhile, he presented the commemorative stamp to Prime Minister Sheikh Hasina. As a tribute from Bhutan, a team from Royal Academy of Performing Arts also made colourful cultural performance at the venue.