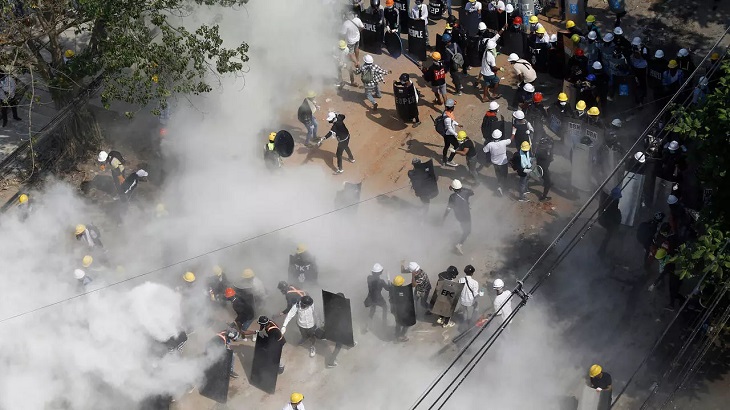 The UN Human Rights Council voiced alarm Wednesday at the "disproportionate use of force" in Myanmar since last month's coup and pushed for a UN rights office in the country.

More than 260 people are confirmed dead in protests that have rocked the country since the coup, according to tolls compiled by NGOs, and thousands have been arrested.

International condemnation from Washington, Brussels and the UN has so far failed to halt the bloodshed.

Myanmar's junta this week insisted it had no choice but to "crack down on the anarchy."

The resolution, adopted without a vote, criticised "the disproportionate use of force, including the indiscriminate use of lethal force, by the Myanmar armed forces and police."

Myanmar hit back at the text, proposed by the European Union, calling it "politicised, one-sided, (with a) lack of impartiality, independence and credibility".

Myanmar's deputy foreign minister Kyaw Myo Htut told the council by video link that elements of the resolution were "intrusive and factually incorrect".

He took particular issue with a reference to possible action by the International Criminal Court, which he said could be seen as a "threat and a direct challenge to our sovereignty".

The text largely echoed a resolution passed last month following a special council session on the crisis, once again condemning the coup and calling for the release of detainees.

Journalists, rights defenders, religious leaders, medical staff, and activists held "on political grounds" should be released, it said, and allowed to return to work "without fear of reprisals, intimidation or attack".

The resolution also stressed the need for the international community to get a better overview of the situation on the ground.

It called for "immediate, full, unrestricted and unmonitored access" for independent observers, experts, diplomats, journalists and UN rights chief Michelle Bachelet, urging her to establish an office in the country.

One of the experts that should be granted access to the country, it said, was the UN's top expert on the rights situation in Myanmar, Thomas Andrews.

Earlier this month, Andrews told the council that Myanmar was currently being "controlled by a murderous, illegal regime".

He warned that the military junta was likely committing "crimes against humanity, including acts of murder, enforced disappearance, persecution, torture."

Wednesday's text called for the establishment of a UN rights office in the country, and encouraged Bachelet to strengthen her team's work to monitor and document the rights situation in Myanmar "with a focus on ensuring accountability for human rights violations and abuses".

It highlighted Rohingya Muslims, more than 740,000 of whom fled to Bangladesh in the face of a military crackdown in 2017 that UN investigators concluded was executed with "genocidal intent".

The resolution pointed out that a decades-old law had in effect made the Rohingya stateless, demanding that their full citizenship be restored.