PM for constructing infrastructures to reap highest benefits from PTA 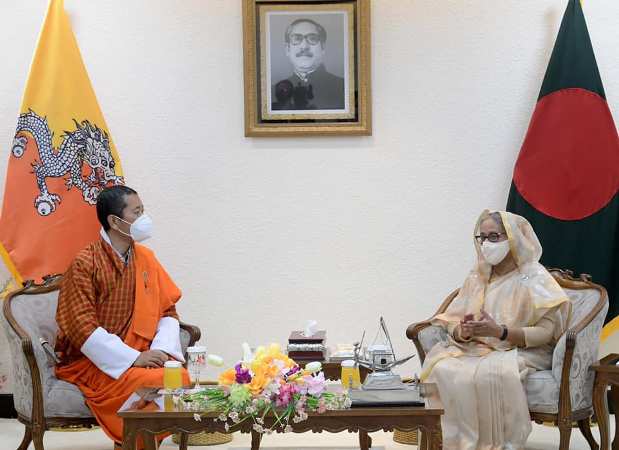 She made the observation during a meeting with visiting Bhutanese Prime Minister Dr Lotay Tshering at her office.

He said that both the Prime Ministers discussed on various fields of cooperation between the two countries, especially trade and connectivity.

Both of them agreed to activate the riverine routes so that trade between the two countries could be expanded.

For establishing cooperation in hydropower project, she asked for formulating bilateral or tripartite MoU in this regard.

The Bhutanese Prime Minister requested Prime Minister Hasina to issue one time multiple full term visa for their students who are studying in Bangladesh.

The Bangladesh Prime Minister agreed upon the issue and asked the officials concerned for taking necessary steps.

Both the leaders also agreed on working together in the United Nations and other forums.

Ambassador of Bhutan to Bangladesh Rinchen Kuentsyl and chief of protocol Daso Ugyen Gongphel were present among others during the meeting.

Bangladesh on December 6, 2020 signed its maiden Preferential Trade Agreement (PTA) with Bhutan to boost bilateral trade between the two countries.

The PTA with Bhutan is the first such bilateral preferential trade agreement Bangladesh signed with any country since independence in 1971.