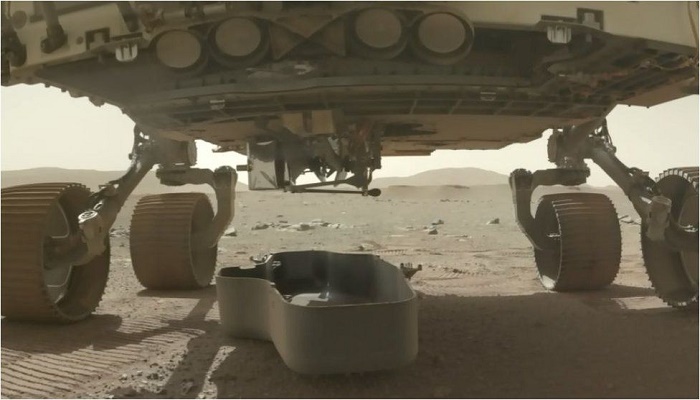 The US space agency says it expects now to fly the first helicopter on Mars in early April.

The little chopper was carried to the Red Planet by the Perseverance rover, which made its dramatic landing in Jezero Crater just over a month ago.

If successful, it would represent something of a "Wright Brothers moment", says Nasa.

This is a reference of course to Orville and Wilbur Wright, who in 1903 conducted the historic first heavier-than-air, powered aircraft flight here on Earth.

And to mark the connection, the agency revealed that a postage stamp-sized piece of fabric from a wing of the brothers' plane has been taped to Ingenuity.

At the moment, the chopper is still attached to Perseverance, to its belly. A protective covering was released at the weekend and in the coming days the craft will be lowered to the ground.

Engineers have identified a 10m by 10m area in Jezero that they're calling the "airfield".

This is at one end of a 90m "flight zone", inside which perhaps five sorties will be performed.

Perseverance will endeavour to record everything on camera.

"We are going to do our very best to capture Ingenuity in flight," said Nasa engineer Farah Alibay

This will be challenging, she cautioned. Both rover and helicopter function autonomously and carry separate clocks. The timing devices will need to be in sync for the photography to catch the action.

Ingenuity is built to be extremely light. It has to be in order to achieve lift in the thin atmosphere of Mars.

It features four specially made carbon-fibre blades, arranged into two 1m-long rotors that spin in opposite directions at around 2,400 revolutions per minute. That is many times faster than the blades would turn on a passenger helicopter here on Earth.

Engineers plan for the first flight to be a simple one that sees the chopper rise to about 3m above the ground, hover and turn for about 30 seconds, before then setting back down.

If everything goes well, subsequent flights will get more complex.

"Currently, the way that we're planning is for the first three flights to demonstrate basic capability - to hover and then to traverse, going to a longer distance down the flight zone and back again," Havard Grip, Ingenuity's chief pilot, told BBC News.

"If everything goes really well, we might try to stretch our capabilities. But we haven't planned that in detail."

Asked whether the team might attempt something dramatic for a final flight, he declined to speculate.

"Could we image areas not visible from space or that a rover couldn't reach? Could a helicopter scout ahead for rovers and help plot the most efficient course for the best science? Could we support future human missions with aerial capabilities?" she pondered.

"Those are questions for another day, but tech demos give us the leeway to be creative and test new things."

Nasa has approved a mission called Dragonfly that will use a robotic rotorcraft to fly across the surface of the Saturnian moon Titan in the 2030s.

The Soviets were the first to fly air vehicles on another world with their Vega balloons in the atmosphere of Venus in the 1980s.