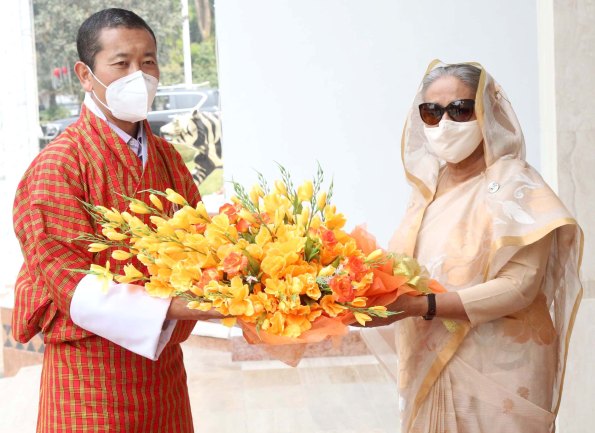 Bangladesh and Bhutan held bilateral talks at the Prime Minister’s Office in Dhaka on Wednesday morning.

Both the Prime Ministers discussed on various fields of cooperation between the two countries, especially trade and connectivity.

Both of them agreed to activate the riverine routes so that trade between the two countries could be expanded.

For establishing cooperation in hydropower project, she asked for formulating bilateral or tripartite MoU in this regard.

The Bhutanese Prime Minister requested Prime Minister Hasina to issue one time multiple full term visa for their students who are studying in Bangladesh.

The Bangladesh Prime Minister agreed upon the issue and asked the officials concerned for taking necessary steps.

Both the leaders also agreed on working together in the United Nations and other forums.

Ambassador of Bhutan to Bangladesh Rinchen Kuentsyl and chief of protocol Daso Ugyen Gongphel were present among others during the meeting.

Lotay Tshering arrived in Dhaka on Tuesday to join celebration of birth centenary of Bangabandhu and golden jubilee of Bangladesh liberation war.