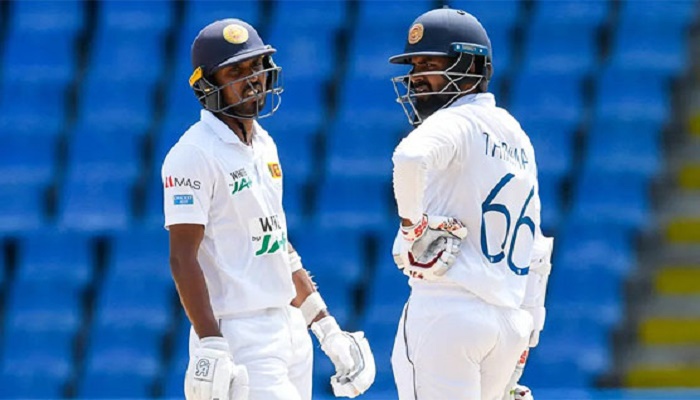 Oshada Fernando and Lahiru Thirimanne led a Sri Lankan fightback as the tourists reached 255 for four in their second innings, a lead of 153, at close of play on the third day of the first Test against the West Indies in Antigua on Tuesday.

With the other Fernando in the team, fast-medium bowler Visha, doing just what was required in the taking the last two West Indies first innings wickets at the start of the day to dismiss the home side for 271, it was the fluent middle-order batsman Oshada who starred with an innings of 91 in a 162-run second wicket partnership with Thirimanne.

Fernando, in just his eighth Test, came to crease in the fifth over of the innings when his captain Dimuth Karunaratne, failed for the second time in the match, driving loosely at Kemar Roach to give John Campbell a straightforward catch at third slip.

The 28-year-old Fernando was given a life on 17 when he was dropped at leg-slip by Jason Holder off off-spinner Rahkeem Cornwall but looked assured throughout his innings which spanned 149 deliveries and included 11 fours.

Fernando appeared destined for a second Test hundred until West Indies skipper Kraigg Brathwaite, in what was either a moment of inspiration or desperation, brought on Kyle Mayers as his seventh bowler of the innings.

The occasional medium-pacer met with instant success as Fernando pushed at his first ball, a full-length delivery just outside off-stump, and edged a catch to wicketkeeper Joshua Da Silva.

When Roach returned for another spell and bowled the obdurate Thirimanne for 76 to follow his first innings top score of 70, Sri Lanka were wobbling at 189 for four.

Just when the West Indies might have sensed a chance to sweep away the rest of the Sri Lankan batting, Dhananjaya de Silva and debutant Pathum Nissanka featured in an unbroken fifth-wicket partnership of 66 and will resume on the fourth morning seeking to extend their overall lead beyond 250 to give themselves a fighting chance of pulling off a come-from-behind victory.

"I think this is a good batting pitch because it has flattened out nicely," said Mayers in assessing the day's toil, even with his double-strike.

"They had the upper hand today but the game is still evenly poised.

"We just need to pick up two early wickets (on the fourth day) and things can look very differently."

Earlier, West Indian hopes of extending their 99-run overnight lead ended in the second over of the day when Vishwa Fernando bowled Cornwall for a top score of 61 and then trapped last man Shannon Gabriel leg-before without scoring.

Suranga Lakmal missed out the tail but ended with career-best Test innings figures of five for 47, an improvement on the fast-medium bowler's previous best of five for 54 against New Zealand in the Boxing Day Test in Christchurch in 2018.