Ton-up Marshall, Shahadat put their teams on top, Nasir on course for hundred 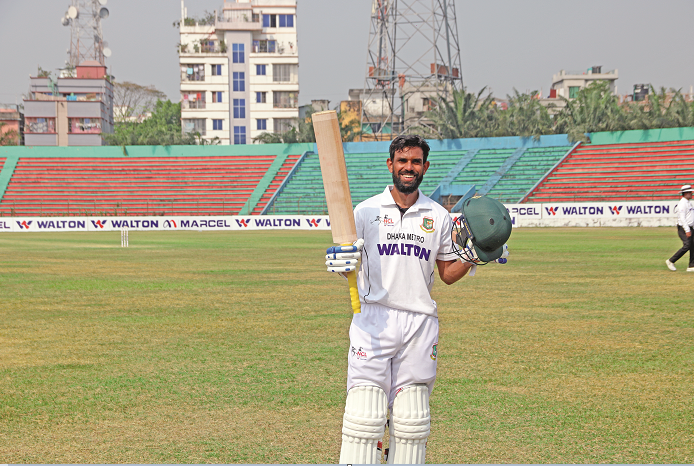 Marshall Ayub and Shahadat Hossain struck hundreds for their respective side while Nasir Hossain made unbeaten 93 runs for Rangpur Division on the second day of the first round of the National Cricket League on Tuesday.

Skipper Marshall struck 112 runs as Dhaka Metropolis made 324-7 in their first innings at stumps against Barishal Division in Barishal and took an 83-run lead over their opponents in a tier-2 match.

Shahadat completed his maiden first-class ton as Chattogram Division made 287 runs in their first innings before bowling out Rajshahi Division for 152 runs in Rajshahi. 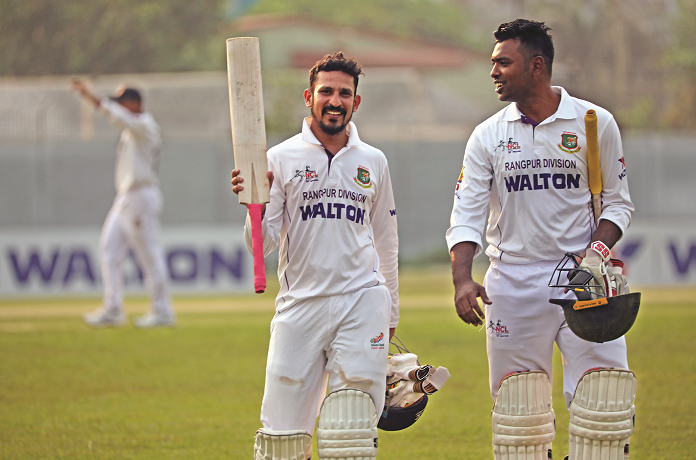 Rajshahi’s Farhad Reza then claimed 3-18 to reduce Chattogram to 43-5 in their second innings at the end of the second day’s play of another tier-2 encounter.

Nasir needs only seven runs to complete his eighth first-class ton as Rangpur Division made 194-7, replying Dhaka Division’s first innings total of 365 runs at the BKSP in a tier-1 match.

Pacer Masum Khan claimed 4-32 as Khulna reduced Sylhet Division to 130-8 after the reigning champions made 375 runs in their first innings in Khulna in the other tier-1 game.

Resuming an overnight score of 29-1, Dhaka Metro finished the day again on top after Marshall scored his 21st first-class ton while Zahiduzzaman, Zabid Hossain and Shohidul Islam made 60, 41 and unbeaten 42 respectively.

Barishal earlier were bowled out for 241 runs in their first innings.

Chattogram are favourites to win the tier-2 match against Rajshahi after they took a handsome 135-run first-innings lead courtesy of Noman Chowdhury and Mehedi Hasan Rana who claimed four and three wickets respectively.

Rajshahi’s Farhad, who claimed four wickets in the first innings, brought some respite later in the day as Chattogram lost half of their side and the lead is extended to 178 runs.

Earlier, Chattogram were bowled out for 287 runs in their first innings after resuming on 256-7 on the second day. Shahadat made 108 runs off 256 balls and became the last batsman of Chattogram to get dismissed.

Resuming on 297-8, Dhaka were bowled out for 365 runs in their first innings after Arafat Sunny Jnr made unbeaten 42 runs.

However, Nasir, who is eyeing a national comeback through NCL, made unbeaten 93 runs off 185 balls as Rangpur is still in the fight to avoid follow-on as they are trailing by 171 runs.

Overnight unbeaten Nahidul Islam made 48 runs to help Khulna score 375 runs in their first innings after resuming on 308-7.

Imtiaz Hossain and Enamul Haque Jnr scored 37 and 30 not out and none other Sylhet batsman could make good scores as Sylhet are unlikely to avoid follow-on as they are still trailing by 245 runs against Khulna with only two wickets in hand. 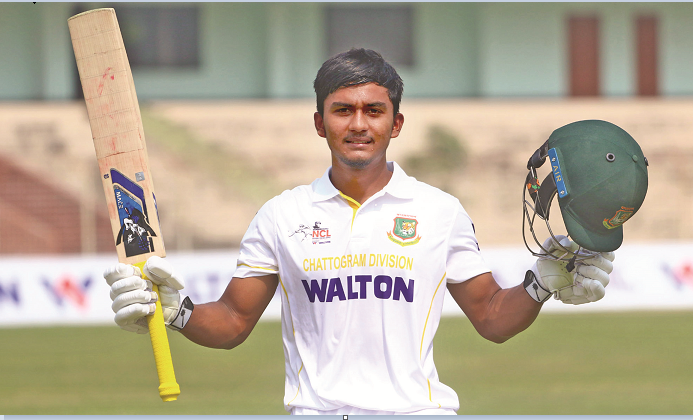