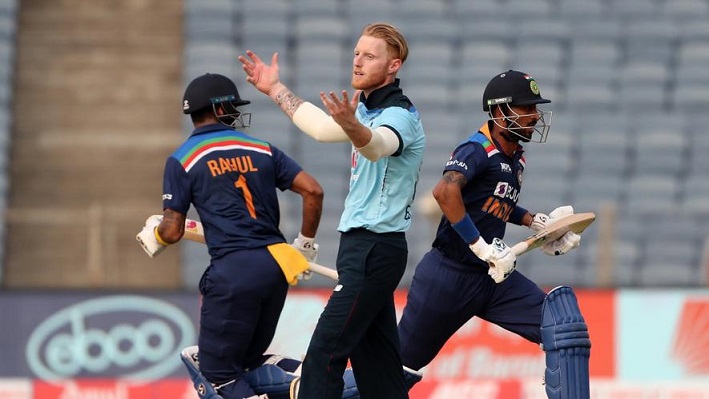 Opener Shikhar Dhawan and K.L. Rahul hit big scores as India reached 317 for five in the opening one-day international against England on Tuesday.

England also suffered worrying injuries to captain Eoin Morgan and Sam Billings at the start of the three match series in Pune.

Dhawan made 98 while Rahul hit 62, Krunal Pandya smashed an unbeaten 58 off 31 balls and captain Virat Kohli hit 56 after the hosts were put in to bat.

Left-hander Krunal put on an unbroken stand of 112 with wicketkeeper-batsman Rahul as India finished with a flourish.

England suffered in the field. Billings "sprained his collar bone joint" and skipper Morgan needed four stitches on the webbing between his thumb and index finger.

Both were expected to try to bat though.

Ben Stokes struck first with his pace bowling, claiming Rohit Sharma caught behind for 28. He returned figures of 3-34 from eight overs.

Dhawan put on 105 for the second wicket with Kohli. He made his 31st ODI fifty with a six off leg-spinner Adil Rashid.

Kohli reached a run-a-ball fifty but fell to pace bowler Mark Wood after he miscued a hit to deep square leg and Moeen Ali took the catch.

Dhawan, who was dropped on 59 by Moeen at deep mid-wicket, fell short of his hundred after he mistimed a pull off Stokes to get caught by Morgan.

He hit 11 fours and two sixes in his 106-ball knock before getting out in the nineties for the fifth time in 137 one-day innings. The 35-year-old has 17 centuries.

Krunal completed his 50 in 26 balls to record the fastest fifty for an ODI debutant and later choked up with emotion while dedicating the innings to his father who died in January.