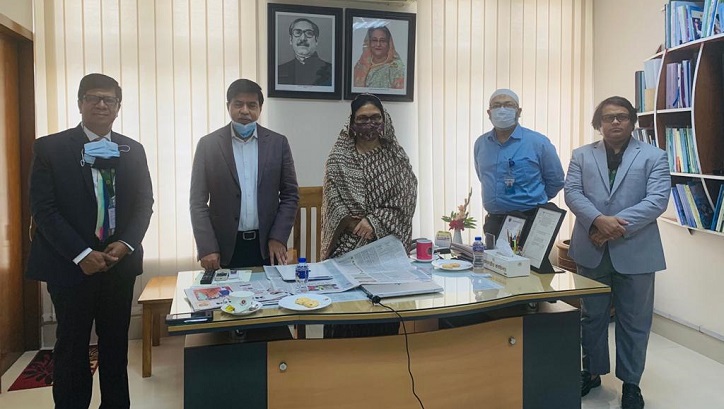 Members of Parliament (MPs) of Jatiya Sangsad have urged the government to amend to existing related to tobacco control in a bid to achieve Sustainable Development Goals (SDGs) of the country.

A delegation of the parliamentary forum, ‘Bangladesh Parliamentary Forum for Health and Wellbeing’ met Chief Coordinator (SDG) at the Prime Minister's office Juena Aziz on Tuesday and made the request about amending the tobacco control law, said a press release of the organisation.

The delegates of ‘Bangladesh Parliamentary Forum for Health and Wellbeing’ also held a meeting with Juena Aziz and discussed taxation on tobacco products and initiatives of MPs for ensuring tobacco free Bangladesh, at the office of the Prime Minister.

During the meeting, on behalf of the parliamentary forum, its chairman Prof. Dr. Md. Habibe Millat MP, also founding chairman of Shastho Shurokkha Foundation, informed Juena Aziz about the harmful aspects of tobacco.

Referring to the declaration of Tobacco Free Bangladesh announced by the Prime Minister Sheikh Hasina by 2040, he informed about the various initiatives taken by the MPs in this regard including the recommendation to amend the existing Tobacco Control Law.

Dr Millat said that, tobacco indirectly costs thousands of crores money. As well as a large part of the non-communicable diseases are being caused by tobacco; and its economic value is putting pressure on our national economy. Cigarettes and tobacco products are associated with drugs. It also indirectly encourages the use of drugs.

“So, raising awareness and amending existing tobacco control laws is the right solution,” he added.

Juena Aziz also praised the initiative of the MPs in tobacco control activities in Bangladesh saying that, “Awareness needs to be created for tobacco control. Everyone should be aware about the harmful effects of tobacco and tobacco products. In this case, it’s necessary to amend the law if possible. I think if the Members of Parliament can take initiative in this regard, positive results will come to law amendment.”

Dr. Nizam Uddin Ahmed, executive director of Shastho Shurokkha Foundation  said people who are involved in tobacco related professions, those who work in cigarette or bidi shops should be more aware about health protection. “Second hand smoking needs to be stopped, especially in hotels-restaurants or places where there are smoking zones.”

According to the organization, 67 per cent of total deaths in Bangladesh are caused by non-communicable diseases (NCDs). It’s because of tobacco. According to Tobacco Atlas, every year in Bangladesh almost 1 lakh and 61 thousand people die from tobacco related disease.

The UN Sustainable Development Goals (SDG) also focus on tobacco control to control NCDs. Bangladesh signed the WHO’s Framework Convention on Tobacco Control (FCTC) in 2003. It’s already been included in the Seventh Five-Year Plan to meet the SDGs. As a result, tobacco control activities have been integrated with mainstream development activities. In that continuity, in order to achieve SDG, it is necessary to take initiative to amend the existing tobacco control laws in Bangladesh.

Among others, joint secretary (SDGs) of Prime Minister’s Office, Mohd. Monirul Islam and director of the SSF Md. Rafiqul Islam were present there.

The delegates of ‘Bangladesh Parliamentary Forum for Health and Wellbeing’ also placed six proposals to incorporate in the amendment of tobacco control law of Bangladesh.

The proposals -Remove the exemptions in the smoking ban for restaurants and public transport; 2. Ban the display of tobacco products at point of sale; 3. Ban tobacco company ‘Corporate Social Responsibility’ activities; 4. Ban the sale of single sticks and unpackaged smokeless tobacco; 5. Ban the sale and import of E-Cigarettes and heated tobacco products; 6. Allow for stricter rules on packaging including increases to the size of health warnings.