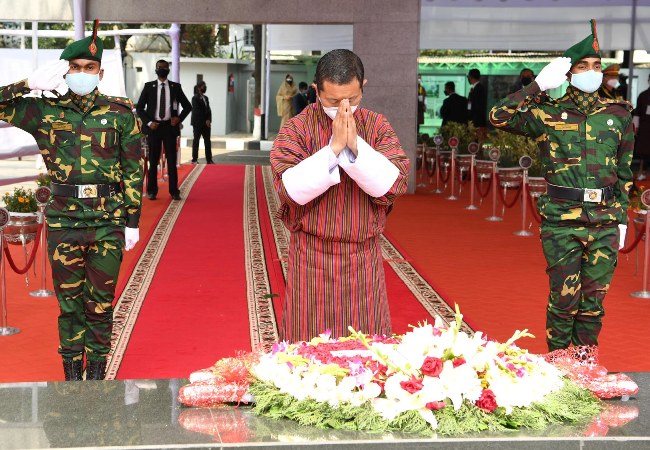 Tshering showed his deep respect to Bangabandhu by placing a wreath at his portrait on the premises of Bangabandhu Memorial Museum at Dhanmondi road number 32 around 12.20 pm.

Earlier, on his arrival there, the Bhutanese Prime Minister was received by Sheikh Rehana, the younger daughter of Father of the Nation Bangabandhu Sheikh Mujibur Rahman.

“On behalf of the people and the Royal Government of Bhutan, I offer my humble respect and prayers to Bangabandhu Sheikh Mujibur Rahman for giving above the manacles of foreign exploitation and blessing the nation onto a path of unprecedented peace, prosperity and stability,” the Bhutanese premier wrote in the visitors’ book.

His daughter Sheikh Hasina is now fulfilling Bangabandhu’s vision of ‘Sonar Bangla’, and with each passing year Bangladesh is becoming more prosperous and its people are being more happy, he also wrote.

Prior to this, the Bhutanese Prime Minister paid rich tributes to the memory of martyred freedom fighters by placing a wreath at the National Memorial in Savar on the outskirts of the capital at about 10.30 am.

Tshering arrived Dhaka this morning on a three-day official visit to join the celebrations of the golden jubilee of country’s independence and the birth centenary of Father of the Nation Bangabandhu Sheikh Mujibur Rahman.