"Horrific": Swarms of spiders and snakes emerge in flood-hit Australia 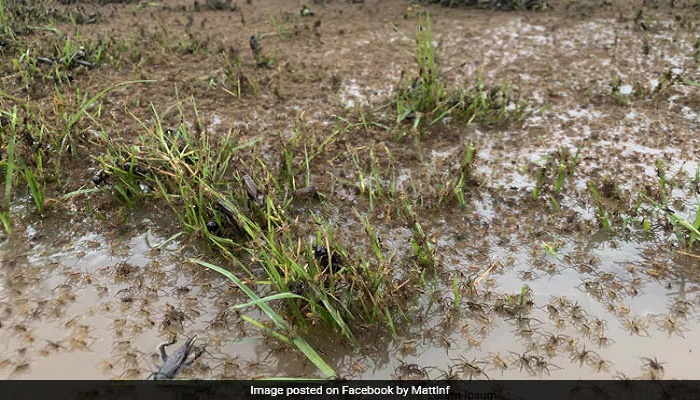 Heavy rains along Australia's east coast over the weekend have brought the worst flooding in half a century in some areas. The record-breaking floods have caused a mass animal exodus to higher ground, reports CNN, with spiders in particular swarming out to escape the floodwater.

Horrifying images that have gone viral on social media show hundreds of spiders trying to scuttle to safety. One of the most viral images was captured by Matt Lovenfosse, who saw a swarm of spiders running away from the rising waters of Kinchela Creek on Monday.

"All the brown you can see is Spiders trying to beat the flood water," he wrote while sharing the picture on Facebook yesterday.

The picture has gone viral on social media, racking up more than 38,000 'shares' on Facebook alone. It has also made its way to Twitter, where many branded it the "stuff of nightmares".

"Horrific," wrote one person in the comments section. "I never seen so many spider in my life, I thought we had spiders in California," another said.

"It's amazing. It's crazy," Mr Lovenfosse told Guardian Australia. "The spiders all crawled up on to the house, on to fences and whatever they can get on to."

It wasn't just spiders that he spotted. "The trees are full of snakes," he said. "If you take the boat out over the paddock they swim towards it trying to get on something dry, same with the spiders."

Another Australian, Melanie Williams, also captured the hair-raising sight of dozens of spiders crawling on the ground.

"They had to remove some spiders, a couple of snakes and lots of insects before they could put the four children and two parents back on board and paddle them back to safety," NSWFR Inspector Russell Turner said.

The relentless week-long downpour has soaked most of New South Wales, causing surging rivers to burst their banks; swallowing homes, roads, bridges and farmland. About 18,000 people have already been evacuated across New South Wales.