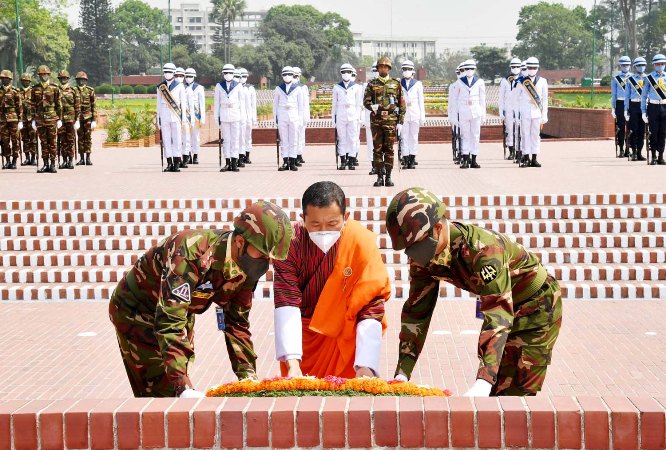 Bhutanese Prime Minister Dr Lotay Tshering has paid rich tributes to martyrs of Bangladesh liberation war at National Memorial in Savar on the outskirts of the capital.

The Bhutanese Prime Minister paid homage by placing a wreath at the memorial at 11am on Monday.

A smartly turned-out contingent drawn from Bangladesh Army, Navy and Air Force gave him a guard of honour while the bugles played the last post.

Tshering also signed the visitors’ book at the memorial.

“It is an honour for me to pay tribute to the brave sons of Bangladesh who sacrificed their lives for the country during the Liberation War. May their sacrifices remain etched in the annals of Bangladesh’s history,” the Bhutanese premier wrote in the visitors’ book.

He also planted a fruit sapling of ‘Latkan’ (Baccaurea sapida) on the memorial premises.

Prior to this, Bhutanese Prime Minister Dr Lotay Tshering arrived in Dhaka on a three-day state visit to attend grand celebration commemorating birth centenary of Father of the Nation Bangabandhu Sheikh Mujibur Rahman and golden jubilee of Bangladesh’s Independence.

He is the 4th of the South Asian leaders to attend the grand celebrations.

Prime Minister Sheikh Hasina welcomed her Bhutanese counterpart at the VVIP tarmac of the airport by presenting him with a bouquet. She was accompanied by Foreign Minister Dr AK Abdul Momen and other high-ups.

The Bhutanese leader was accorded guard of honour by smartly turned-out contingent of Bangladesh Armed Forces. Nineteen gun-salutes were heralded in the air to welcome the Bhutanese premier.

From Savar, Dr Lotay Tshering will then move to Bangabandhu Memorial Museum at Dhanmondi and pay homage to Bangladesh’s founding father by placing floral respect at his portrait.

The Bhutanese premier will drive to InterContinental Dhaka where he will be staying during his visit.