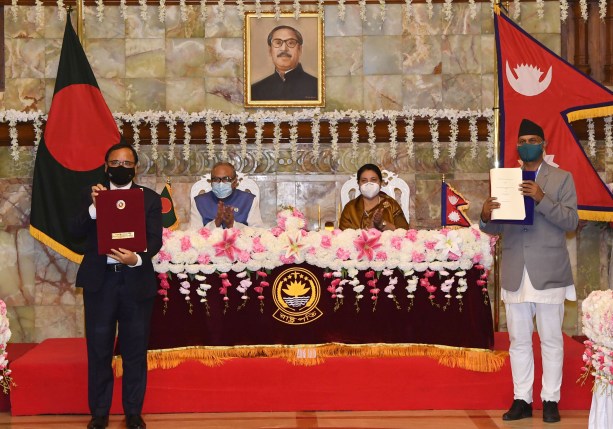 Dhaka and Kathmandu on Monday signed four Memorandum of Understandings (MoUs) to enhance cooperation between the two countries in different areas including tourism, sanitation, cultural exchange and railways link.

The MoUs were inked after the bilateral talks between Bangladesh and Nepal at the Credential Hall of Bangabhaban in the capital in the evening.

Earlier, on arrival of the Nepalese President at the Bangabhaban, she was received by President Abdul Hamid and his wife Rashida Khanam at the Octagonal of the Presidential palace.

The MoU signing ceremony was followed by a cultural function and dinner.

Bangladesh President hosted the dinner at the State-Dining Hall in honor of Nepalese counterpart, who is on a two-day tour here to attend the twin historic celebrations – Bangladesh’s Independence golden jubilee and birth centenary of Father of the Nation Bangabandhu Sheikh Mujibur Rahman.