7 killed in massive fire at Rohingya camp in Cox's Bazar 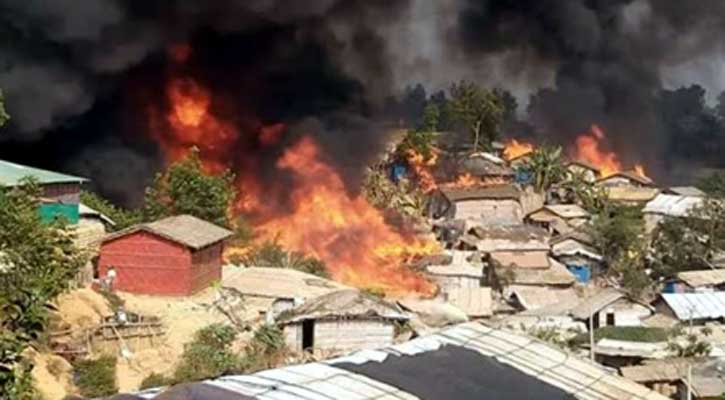 Seven people were reportedly killed and hundreds of others injured in deadly fires that burned several thousand shanties at Balukhali refugee camp in Ukhiya of Cox's Bazar on Monday.

The blaze also forced at least 50,000 people to flee their home, officials and aid workers said.

The government's refugee office and police, however, had yet to confirm any deaths.

Officials said the blaze started around 4:00pm on Monday in one of the 34 camps -- which span about 8,000 acres (3,237 hectares) of land -- before spreading to three other camps, with refugees fleeing the shanties with whatever belongings they could carry.

Mohammad Shamsudoza, additional refugee, relief and repatrition commissioner, said 1,500-2,000 houses were completely burnt down while 5,000-6,000 other houses were damaged.

Firefighters brought the blaze under control around midnight, with the Refugees International saying at least 50,000 people fled their shanties as the blaze reduced thousands of shelters made of tarp and bamboo to ashes.

Nearly one million of the persecuted Muslim minority from Myanmar -- many of whom fled a military crackdown in their homeland in 2017 -- live in cramped and squalid conditions at the camps in the southeastern Cox's Bazar district.