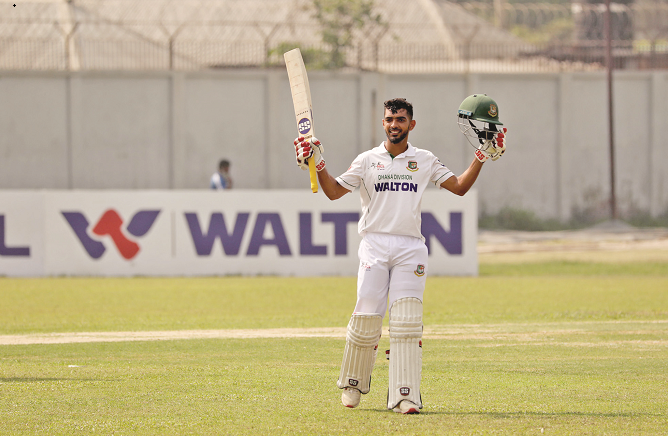 National opener Saif Hassan starred on the opening day of the first round of the 22nd National Cricket League that got underway on Monday across four different venues of the country.

Saif struck 127 runs Dhaka Division against Rangpur Division in a tier-1 match, helping his side finish the first day at 297-8 at the BKSP.

Tushar Imran and Imrul Kayes fell to nervous nineties but their side, reigning champions Khulna Division finished the opening day on top, scoring 308-7 against the newly-promoted Sylhet Division in the other tier-1 match at the Sheikh Abu Naser Stadium in Khulna.

Dhaka lost both their openers – Abdul Mazid and Rony Talukdar without opening their scoreboard within the third over after electing to bat first against Rangpur.

Saif and Mahidul Islam put up a 79-run stand for the third wicket before the latter was dismissed on 47.

Despite losing few quick wickets, Saif anchored the innings and added 137 runs for the sixth wicket with skipper Nadif Chowdhury to take Dhaka’s total close to the 300-run mark.

Nadif made 69 runs while Saif completed his fifth first-class hundred.

Saif was later dismissed by pacer Alauddin Babu, the most successful bowler for Rangpur, claiming 4-25, after hitting 11 fours and five sixes in his 233-ball innings.

Sent into bat first, Khulna lost opener Imran Uzzaman (15) early in their innings but Robiul Islam and Imrul Kayes added 110 runs for the second wicket to give an advantage to the hosts.

Robiul was dismissed on 37 while Imrul followed him soon, making 90 off 127 balls.

Tushar then anchored their innings while other batsmen could not accompany him much.

The domestic veteran was unfortunately run out on 99 off 117 balls, missing out his 32nd first-class ton for just one run although his side managed to end the day on a high note.

In Rajshahi, Chattogram bowlers took four quick wickets after deciding to bowl first to reduce the hosts to 52-4 before Yasir and Shahadat put up 88 runs for the fifth wicket to steady their innings.

Yasir made 63 runs but Shahadat continued his fine work with bat and finished the day unbeaten and he is now only 12 runs shy of his maiden first-class hundred.

Pacer Abu Hider and left-arm spinner Rakibul Hasan bagged three wickets each as Barishal Division were bowled out cheaply against Dhaka Metro after deciding to bat first in Barishal.

Mohammad Ashraful made the highest 48 runs for Barishal.

Dhaka Metro also lost opener Anisur Rahman (10) early in their first innings and they are still trailing by 212 runs.