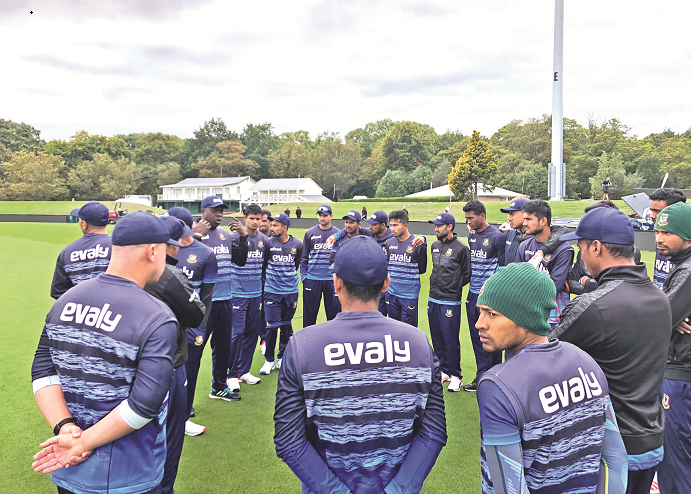 Bangladesh will be eyeing to leave behind their opening game misery when they take on the hosts in the second of the three-match ODI series at Hagley Oval, Christchurch today.

The match is scheduled to start at 07:00am and will be televised live on T Sports.

Bangladesh lost the opening game by eight wickets after coming up with a bizarre batting display and just made 131 runs in Dunedin. The tourists are hoping to avoid a similar display in the second match otherwise they will suffer another series defeat with one match to spare.

The Tigers arrived in New Zealand with a sense of hope and looked determined to earn their maiden win on New Zealand soil after 13 ODI losses on a trot.

Their confidence was bolstered as the tour started with their most preferred format, one-day internationals against New Zealand and the absence of Kane Williamson and Ross Taylor, who are considered to be the pillars of the Kiwi batting unit, only made the tourist hopeful until they crossed paths with reality in the series opener.

Pacer Trent Boult jolted Bangladesh out of their dreamy state and the batsmen crumbled in the face of sustained pressure.

“The last match was quite awful for us and I’d still say we couldn’t show our full potential in the last match. We hope to leave Dunedin behind us and make a new start from Christchurch. As it is a totally new venue and we’d try our best to have a good start over there,” Mohammad Mithun said on Monday.

Captain Tamim Iqbal has called for a marked improvement and refuted the suggestion that his team wasn't fully prepared and equipped to deal with the conditions in New Zealand.

Avoiding soft dismissals and giving the bowlers a lot more than 131 to work with is right up on Tamim's agenda as his side heads into the second fixture hoping to drag the series out to the third one and Mithun echoed the same sentiment.

“There is a common problem with us that we tend to lose the match in the first five overs. Basically, when we bat first we need to put up a fight and put a good score on the board, something around 260-270 as generally matches at New Zealand have high totals, which will give our bowlers something to bowl at.

“There is no alternative for the batting order to take responsibilities no matter what condition we have at hand,” said Mithun.

“Generally, the Christchurch wicket has less of a bounce and generates more pace, which is a good sign for the batsmen, as the pace enables the ball to come to the bat fast and the batsmen usually find this to be an advantage.

“As they can hit it fast so I’m looking forward to playing in Christchurch and hoping to brush away the Dunedin embarrassment and to do better,” he added.

New Zealand, on the other hand, will like to complete their series win today and the team management is likely to bring back Taylor for the second match, who missed the first ODI with a hamstring injury.