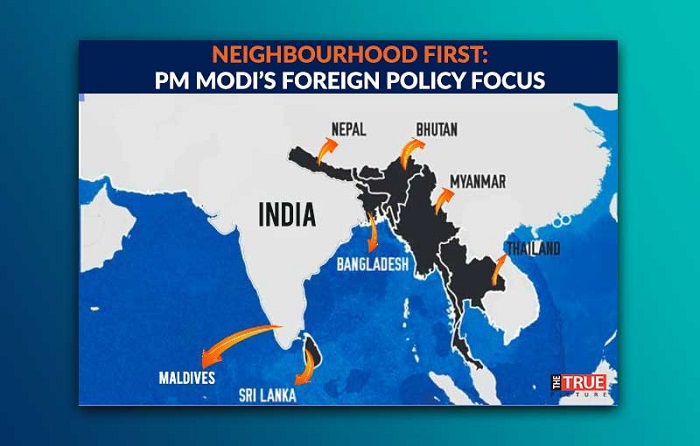 Prime minister Nerendra Modi will be visiting neighbouring Bangladesh on March 26. This is the first time in 15 months that Nerendra Modi is paying a visit to a foreign country. All this time Modi jee has been spearheading the war against Corona for which the world rightfully has applauded his efforts. Now that India has successfully developed its own Corona Vaccine Modi jee has begun to share it with the neediest. He will be taking along with him nine million dozes of corona vaccine of which two million dozes are a free gift from India. India does not only preach Neighbourhood First policy she practices it as well.

India under Modi has faithfully been extending help to all its neighbours. She has offered a large amount of scholarships to students from Afghanistan, Nepal, Bangladesh, Bhutan, Maldives and Srilanka. India is running more than 150 development projects in Nepal which account for 30% of Nepal’s direct foreign investment.

In 2020 India issued US $ 15 million in assistance to neighbouring Srilanka for promoting Buddhist ties between the two countries. In September last year, India began millions of dollars’ worth of High Impact Community Development Projects in Srilanka that would spread over a period of five years.

Afghanistan, which has been devastated due to war, has also been a beneficiary of India’s Neighbourhood First policy. The construction of a hydroelectric and irrigation dam called Afghan-India Friendship Dam is just one example of India’s resolve to help her neighbours. The dam will irrigate 75,000 hectares of agricultural farmland in Chishti Sharif district and produce 42 MW power. Currently, there are more than 400 development projects that India is assisting Afghanistan with.

India did not hesitate one bit when Pakistan placed a request to buy Indian manufactured Covid vaccine. What more evidence does one need for proving that India does not hold animosity toward any of her neighbours even if they are harbouring terrorist groups that have caused havoc in Kashmir.

When it comes to regional foreign policy, unlike China, India has proved to be a caring neighbour. For instance, immediately after the Chinese Communist Party usurped power in 1949 late Chinese foreign minister and later premier Zhou Enlai penned down Five Principles of foreign policy for Communist China to follow. At the time they were hailed as masterpiece of modern foreign policy that, if adhered to, would guarantee peace in the region. The ‘Five Principles’ called for non-interference in each other’s internal affairs, mutual respect of sovereignty, mutual non-aggression, equality and mutual benefit and peaceful co-existence.  The Five Principles of foreign policy were announced on September 29, 1949 as China’s guiding principle for foreign policy. However, soon after the above mentioned principles were contradicted by none other than the architects of the doctrine of peaceful coexistence Mao Tse Dong and Zhao Enlai themselves.

India on the other hand is a large country covering a landmass of 3,287,263 square kilometers inhabiting more than 1.35 billion people and bordering with Afghanistan (via PoJK), Pakistan, China, Nepal, Bhutan, Myanmar, Maldives, Srilanka and Bangladesh. None of her neighbours have ever been attacked or bullied by India.

Prime minister Modi’s visit to the secular state of Bangladesh on March 26 will strengthen mutual ties between both countries. During his visit Modi jee will be paying respects at Gopalganj where the struggle for the liberation of Bangla nation from the oppression of Pakistan first began. He will also visit Orakandi which is a sacred shrine of the Matua community.

One must not forget that since her independence, Bangladesh like India has maintained religious harmony by allowing communities from other faith to freely practice their religion.

Hence, there are 356 mosques but 359 temples in Gopalganj! There are 250 churches and 4 tombs in Gopalganj as well.

Together, India and Bangladesh have a shared past that consists of our unified struggle against a common enemy; the British Raj.  We also share a common political, economic and social heritage.

In today’s international and brutally competitive economic global environment Modi jee’s visit to Bangladesh can prove to be a new chapter in regional politics and build an invincible economic partnership between our two countries that would benefit millions.

(Dr Amjad Ayub Mirza is an author and a human rights activist from Mirpur in PoJK. He currently lives in exile in the UK.)