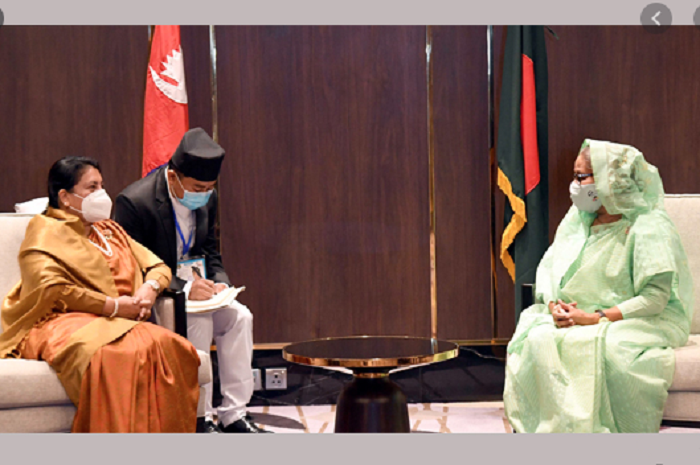 Nepalese President Bidya Devi Bhandari today highly praised Prime Minister Sheikh Hasina for her dynamic leadership, eulogizing “You are a much inspiring leader in the world.”

“I am your admirer,” she said when Bangladesh premier paid a courtesy call- on her at the Intercontinental Hotel in the capital this afternoon.

The Nepalese President said that Bangladesh has made remarkable progress under the leadership of Prime Minister Sheikh Hasina.

On women empowerment, Bidya Devi Bhandari said that Bangladesh can be a role model for women’s participation in national development tasks.

The Nepalese President thanked the Bangladesh premier as they got prompt support from Bangladesh while they needed fertilizer.

She thanked the Bangladesh premier for offering Nepal to use Bangladesh’s port facilities and the Syedpur Airport.

The Nepalese president stressed the need for enhancing connectivity among the BIMSTEC member-states.

Mentioning that both the countries face adverse impact of the natural disasters, she said that both the countries could ensure maximum use of their respective resources to face the calamities.
The Nepalese President handed over two books– ‘Unfinished Memoirs ’ and ‘Karagarer Rojnamcha’of Bangabandhu translated into Nepali language to the Prime Minister.

Prime Minister Sheikh Hasina welcomed the Nepalese President’s visit to Bangladesh to join the celebrations of the birth centenary of the Father of the Nation and golden jubilee of Bangladesh’s independence.

The premier also greeted Bidya Devi Bhandari as her country extended supports including supplying of arms to freedom fighters of Bangladesh during the War of Liberation.

She described Nepal as a vulnerable country to climate change.

The premier offered Nepal to use Chattagram and Mongla ports and the Syedpur International Airport.

In this connection, she said, “We are developing the Syedpur Airport as a regional airport.”

The Prime Minister emphasised on mutual cooperation in the fields of trade and commerce and signing of the preferential trade agreement (PTA) between the two countries.

“It will be beneficial for both the countries if the PTA is signed,” she opined.

She also advocated for strengthening connectivity among the BBIN (Bangladesh, Bhutan, India and Nepal) member states as it will boost trade and commerce in the region.

The Prime Minister said that a hydroelectric power plant could be set up using the water resources of Nepal with joint cooperation of Bangladesh, India and Nepal.