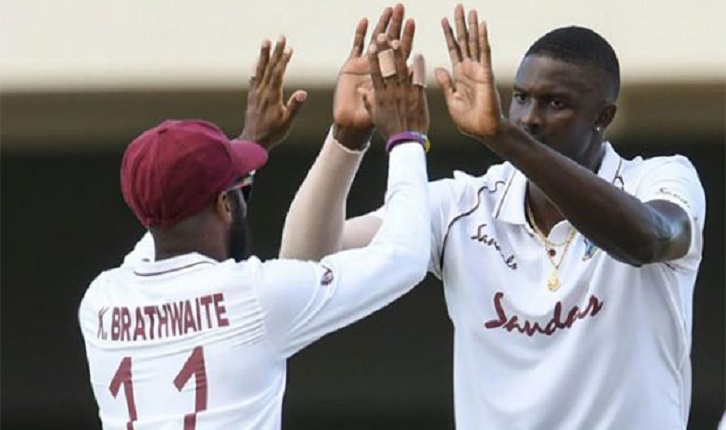 Former captain Jason Holder took five wickets to help bowl out Sri Lanka for 169 as the West Indies took control of the opening Test of their two-match series on the opening day in Antigua on Sunday.

Relieved of the captaincy after five-and-a-half taxing years in the job, any suggestions that the all-rounder would have been lacking in energy and enthusiasm swiftly evaporated on the way to impressive figures of five for 27 off 17.4 overs.

With new skipper Kraigg Brathwaite sharing opening batting duties alongside John Campbell, the pair negotiated a potentially tricky 40 minutes to the close of play and will resume on the second morning at 13 without loss.

Holder's eighth five-wicket innings haul in Test cricket included the important scalp of Lahiru Thirimanne during the final session of the day as the tourists' last five wickets tumbled for just 19 runs.

Thirimanne had offered stout resistance to all the West Indies bowlers for just short of five hours before he dragged a delivery onto his stumps to depart for 70 off 180 deliveries.

Holder, whose first wicket came on the stroke of lunch when another former captain, Dinesh Chandimal, was caught behind, returned in that final session to terminate the only meaningful resistance from the Sri Lankans when wicketkeeper-batsman Niroshan Dickwella was caught at first slip for 32 to end a sixth-wicket partnership of 58 with Thirimanne.

Wicketless and unlucky in the morning session after the Sri Lankans were put in to bat, Kemar Roach grabbed two wickets in the afternoon session and added a third amid the post-tea collapse.

The 32-year-old's final analysis of three for 47 from 16 overs lifted his haul of Test wickets to 208 in his 62nd match after 12 years in the international game.

Deprived of early success when Jermaine Blackwood missed a simple chance at backward-point off Sri Lankan captain Dimuth Karunaratne, Roach earned the rewards for his persistent efforts by bowling Dhananjaya de Silva and then having debutant Pathum Nissanka superbly taken by a diving Holder at second slip to leave the visitors languishing at 92 for five.

"We probably didn't utilise the new ball as well as we would have liked, but it was good to see myself and Kemar breaking the shackles and getting into their middle-order," said Holder.

"They have quite a long tail, in our opinion, and it's something we have at the back of our minds.

"More often than not when you put yourself in this position so early in a Test match you're in the ascendancy in the latter half of the match."

Having put Sri Lanka in at the start of the day, Brathwaite's decision to introduce the off-spin of Rahkeem Cornwall after just seven overs brought immediate returns when Karunaratne fell for 12 via a smart catch by Campbell at forward short-leg.

Brathwaite's speed and accuracy then accounted for Oshada Fernando, the new batsman called through for a sharp single but found well short of his ground by the skipper's direct hit at the striker's end running in from cover.

Despite closing off the three-match one-day international series a week earlier with a match-winning century, Darren Bravo was omitted from the West Indies final XI.